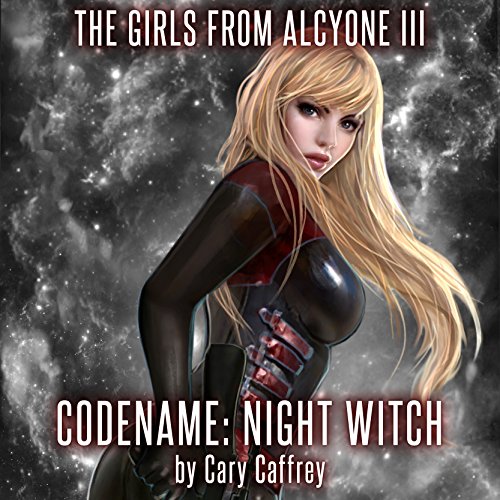 By: Cary Caffrey
Narrated by: Kristin James
Try for £0.00

The unthinkable has happened. Sigrid Novak, the most dangerous and wanted person in the history of the Federation of Corporate Enterprises, has been captured. For the women of New Alcyone - women just like her, genetically reengineered and trained since childhood to be the most effective killers in the galaxy - this is a staggering loss. For the Independents, the rebels who captured her, this is a boon beyond measure.

If they can figure out how to control her.

Now, six years have passed since the events of Bellatrix, and for six years Sigrid Novak has been gone, vanished, with no sign, no word, and no trace. But all has not been quiet within the Federation. The Council for Trade and Finance has been murdered, assassinated, and the death toll among the Federation's ruling elite continues to rise.

With every corporate enclave that falls, the legend grows. They call her the Night Witch. A champion to some, a nightmare for others. Wherever she goes, death is soon to follow.

Then, in an abandoned CTF research facility - and after so many years lost - a woman awakens. Her name is Sigrid Novak. And she is very, very angry.

I Adore this Series!

You know those series that you just can’t wait to read the next book because it starts to feel like a home away from home? The Girls from Alcyone is becoming one those to me, especially now that I actually have to wait for the next book.

Codename: Night Witch picks up a staggering 6 years after the end of The Machines of Bellatrix, with Sigrid waking up in an unfamiliar place with a HUGE gap in her memory. She then sets out to recover those memories and return to Suko and her sisters on New Alcyone, and along the way discovers just how much the galaxy has changed. The beginning is on the slower side as Sigrid works through where she is and a game plan to get home, but it doesn’t linger there for too long. There is plenty of action, intensity, and mystery to keep you moving along and invested in Sigrid’s story. One of my favorite things in this series are the relationships Sigrid forms, from her love for Suko to her quick friendship with Jaffer. These side characters and relationships really make Sigrid and this story what they are, because it’s not just about a girl kicking down doors and taking names but something more personal and connected.

I was somewhat shocked at the time gap between book two and three and was curious to see how it would play out. Those six years are shrouded in mystery and uncertainty, and so much has changed in that time period so there is a lot of relearning in this one. However, I don’t think it brought it down at all. I was able to pick this one up quite easily and slip back into the story without any issues.

Kristen James is back as the narrator and I couldn’t be happier with her performance. I swear she gets a little better with each audio I listen, providing even more unique voices all while truly connecting to the story itself. At some point, she stops reading the story to you and instead starts to build it around you.

I’m in love with this series and I’m so thankful that KJ allowed me to listen to them, it’s definitely a favorite of mine and I’m so ready for book four to come out!

I received this audiobook in exchange for an honest review.

Where does Codename: Night Witch rank among all the audiobooks you’ve listened to so far?

I liked Codename: Night Witch more than the audiobook version of Fahrenheit 451 that I borrowed from my local library.

The things that I liked best about the story were the new characters (Jaffer, Marta, and Colonel Bendari among others), and the great dialogue and action.

Which character – as performed by Kristin James – was your favorite?

My favorite character performed by Kristin James was Lady Hitomi.

The moment in the book that particularly moved me was near the end when Jaffer saved Sigrid's life. This moment said a lot about Jaffer; especially how brave he was.

Kristin James did an excellent job reading the book, including the action, the dialogue (especially the accents of the different characters) and narrating the action scenes. It was easy to visualize what was happening in the book while listening to Kristin James's narration. I highly recommend this! Five stars.

Fast paced, high energy strong characters. Just a great book as are the first two!! Can't wait for another!!!

Sigrid is free from her captor, to face the past.

Kristin has returned for the third book. Yea!!! I enjoy her many voices for the characters. She makes them each distinct and easy to differentiate while listening. She's even started using musical tones in reading the title page and between parts of the book. Cool. Kristin's voice has become Sigrid for me. I feel as though her emotions are present as Kristin voices her, along with all the characters.

We see how the world has changed with the war that's been going on, the Council of Trade and Finance is gone and Independents are fighting. Sigrid wakes and finds she's on Earth, a place she hasn't been in many years. And there is no transports leaving Earth since the CTF was killed by the Night Witch. Sigrid needs to get home. She wants to return to her friends and loved ones.

In the beginning of this book, I wasn't sure how it would all connect. I had my suspicions but wasn't sure. It seemed like the story was far from where we were at the end of book two, but we are six years later. The story had it's slower moments until we get to the point where things connect and turn for Sigrid. There are surprises in moments for Sigrid, in who she has to deal with and how they arrive.

The story comes around to connect and back to the one thing that drives Sigrid to attack. Though, through the story I still wondered how it was that she came to escape so easily in the beginning. I know a few tidbits were dropped, that she would eventually break their hold and all but in the end it seems as though it was a plan from the one who held control over her. Yet that person said she shouldn't have escaped. I'm not sure if she really broke their hold with distance being a factor, though with the ending it's possible.

Cary starts us into a different setting with new characters and plot to get the story rolling. We do come back to Sigrid and the one person she's after. Sigrid finds herself in fights and battles as she works toward her goal. But, with Sigrid it feels as she doesn't want to fight and kill. I love that Sigrid has a deep feeling for humanity and lives. Oh she's powerful and talented enough to kill, and we see that as well, but she doesn't want to do it.

This feels like the series is coming full circle with Sigrid. Earth is where the story started, so why not bring her back here. This is not the end of the series though. An end to an arc story, yes, but Sigrid, Suko, Lady Hitomi, and others of Alcyone will return in book four.

I thought it was a good book, solid story, likeable characters & a solid job of narration.

Part Three of a exciting sci-fi story with a strong lesbian lead. Can't wait until part four comes out.

I'm in love with the Girls from Alcyone!

I listened to all three books back to back and loved them. book 3 irked me with the beginning and with the missing 6 years there should be a book 2.5 where they go through what she did.

I loved this series and can't wait for the next books in it.

There was actual promise for real development of the setting and the hero like never before in this series. She begins with no resources but her own wits and skills, needing to rebuild her support base alone in an unfamiliar planet.

Then she gets almost all of her old assets back instantaneously and she's back in a comfortable position to deal with a clever psychological story that has a surprisingly well crafted climax considering how hamfisted and unbelievable the love story is.

I know the hero and her girlfriend are in love because they say it over and over, but they behave like they are in lust instead. They neither trust nor support each other they way lovers do, choosing to ogle and grope each other like people treating sex as an indiscretions instead of a celebration. The most baffling development of the relationship is when Suko claims they aren't partners because they don't work together in the same business...which they do.