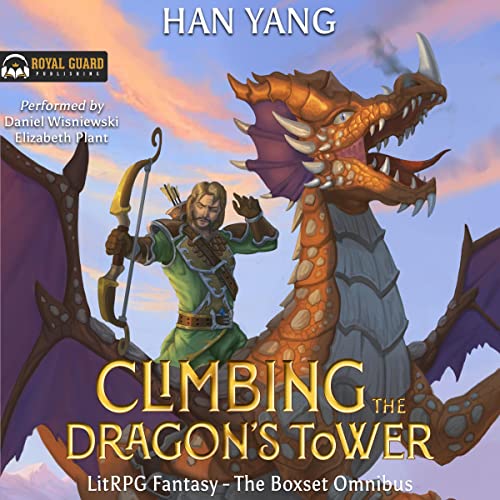 By: Han Yang
Narrated by: Daniel Wisniewski,Elizabeth Plant
Try for £0.00

Books one through three together in one collection!

Climb the tower. Save the planet. Become a Dragon Rider.

Inside the Dragon's Tower, the fate of the world hangs in the balance. To win, climbers from all corners must brave the harrowing floors one by one. Each floor is tougher, and the higher the floor, the less success there is. After a hundred floors filled with unique challenges, a prize awaits—a dragon's egg.

To Tem, the Dragon's Tower seems simple from his distant farmland on the frontier. The harsh truth of the situation involves politics, personal sacrifices, and unfathomable struggles to keep advancing. The fate of world rests in the hands of the brave, and Tem is not one to back down from a fight.

Warning: This book has LitRPG stats. It involves gear, attributes, and leveling up. It also is set in a fantasy world with mythical creatures and magic. There is no explicit sexual content, but some of the fighting can be brutal.

What listeners say about Climbing the Dragon’s Tower: The Box Set Omnibus

I was given a free copy of this book, and I'm leaving an honest and voluntary review.
Great story, characters, and detailing.
my only negative thing is the use of 2 narrators. both are incredibly talented. I'm not a fan of duel narration.
that being said. it in NO way, takes away the fantastic story. I would still recommend this book.

Absolutely loved this one!! Great story and narration

What a fantastic series!! A very interesting storyline, brought to life by a couple of brilliant narrators. You will not be disappointed :)

I couldn’t put it down. Thoroughly enjoyable and if you enjoy LitRPG I would definitely recommend this book to you.

Amazing job by the author. the story line is amazing. it starts from a simple boy searching for adventure in the tower and getting involved in politics, backstabbing etc. the progress is awesome and characters are complex.

There is a lot of confusing reviews for n this series and I guess to each there own. Let me start off by saying Daniel Wisniewski did a good job keeping a bland book somewhat decent.

I also found Elizabeth Plant OK, but she always sounded like she was on the border of crying / whiney and that made me very dislike the female protagonists.

I rather enjoyed this series. It kept me thoroughly entertained. No epic journey or anything. Just a classic grind story. Keep up the great work.

If you're a fan of Daniel Wisniewski, then it's pretty good indeed. I sit on the fence with him as a performer. His voice is good, his character voices and accents are good, his rhythm is sorta weird and can take some time to get used to. Elizabeth Plant was great, no complaints at all with her performance.

Now, on to the story that Han Yang has crafted.

It's a well paced story, I didn't think it had a slow part that dragged on, the characters are fleshed out well enough to understand their motivations, if a bit straight forward and predictable. It is a tower story, but with much of the plot and intrigue outside of the tower. I would say the tower is more of a subplot than the main plot, but the story is good. Han has created a world with a lot of potential to expand upon, with a tower system that he could dive deeper into, and a kingdom with political intrigues and a burgeoning magic system that could support many stories of its own.

Overall it's definitely worth a credit. I did receive a copy for review, but I would have spent a credit on this omnibus and been happy for the 30 hours...even if it does take a bit to get used to Wisniewski's reading rhythm.

But first, I'll mention another book with the same narrator, Tokens and Towers. There, the Zapp Brannigan voice works well with a jerk MC. Back to this book, since the MC seems to be a sincere good guy, the Zapp allure and word emphasis comes off as wrong. But perhaps amusingly wrong. So I stuck with it.

A hundred times or more, we get the message that nobles are better than farmers. I get the point on that, may have been hammered in a few too many times.

The poor farmer is soon dealing with a hundred times more money than his entire hometown with nonchalance.

Still, I'm enjoying it, so I'll stay with it.

A good series, first book is a little slow but my book two the story is really going. I respect that the author took his time to do world building and flush out his charters while slowly forming the story. Definitely worth a read, I hope the author keeps growing and keeps writing.

A captivating boxset even if I wanted to put it down

I have a hard time reviewing this book. The story is amazing and as a box set you get a lot of it. It doesnt go to where you expect but the resolutions are all the better for it. The worst thing for me as a listener was the amount of 1) crass language, 2) innuendo, and 3) general fart jokes. They detract from stories for me usually and if bad enough force me to stop listening… here it was borderline and the story was amazing enough it hooked me through 30 hours of it I just wish I didnt have to wade as much so I could give the glowing 5 star review that I want to. Do not listen to this with kids and only if you have a strong stomach and nerves but it is amazing if you get to the berry through the prickles.

Loved every book of this series

This series was great and I have listened to other stories from this writer. The ending was terrible! This writer just stop’s stories in the middle and writes THE END. In the last book I listened to, the writer even left a personal note at the end of the book saying how successful he is and he doesn’t care if his readers are mad that he doesn’t finish the story. WTF really?

Great value for the money

This is such a good deal for one credit. The story is awesome and the narration is great. You can’t go wrong for this price.

The narrator emphasizes every sentence the exact same way

Every. Single. Sentence. Is ended with the same finality and seriousness as announcing that your wife didn’t make it through childbirth, leaving you as a single father.

Great author. You will want to read this one - and it is three for one!