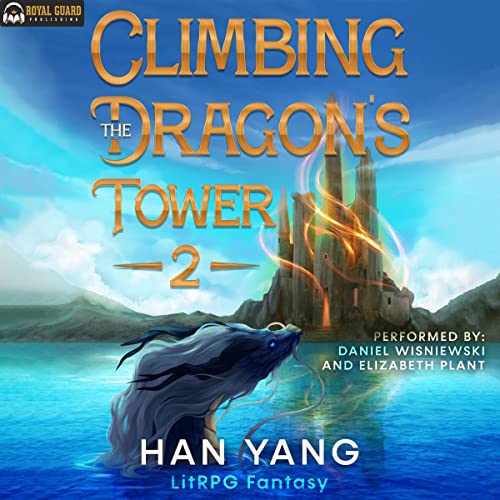 By: Han Yang
Narrated by: Daniel Wisniewski,Elizabeth Plant
Try for £0.00

Life in Iliisa City is rough.

Tem struggles to find a happy balance between climbing the Dragon's Tower to save the world and pleasing the kingdom's nobles just enough to stay out of the dungeon. Fed up with the nonsense of politics, he desires to devote himself to his cause, climbing through the treacherous floors one by one. His wants met reality in this epic continuation of Tem's story where there's sure to be adventure, battle, and glorious twists of fate.

Warning: This audiobook has LitRPG stats. It involves gear, attributes, and leveling up. It also is set in a fantasy world with mythical creatures and magic. There is no explicit sexual content, but some of the fighting can be brutal.

What listeners say about Climbing the Dragon's Tower 2

A lot more progress for everything, Tower climbing, politics and fights.
The pacing of the story felt natural, not rushed and along with amazing narration by both of narrators must makes listening to the story even better

Another well written (and narrated) book

The tower goes on.. will he succeed? Dad on the mend, but the climb continues, with old and new companions.
It’s difficult to review when you don’t want to leave spoilers, but this is up to Royal Guard excellent standards, the book translates excellently. - well worth a credit in my book.

always love the tower climber books and this was no exception. really enjoyed it.

great progression and world building, characters get you invested can not wait for the Next one.

this was a really good sequel to this series, I have no complaints, everything really just fits together in this series. the character progression is better, the world building is the same basically. The plot becomes way better and more detailed, the way it all fits together into the books is just amazing. han yang is an amazing author and Daniel is an amazing narrator. I can't wait for the next sequel...

the second book is so much better!

Between the magic and the action I was captivated by the story! it is an even better book than the first!

Just as good as first

This book was just as good as first. Farm boy climbs up tower more and married Anna. Sad to see Four die but Anna is a true ride or die!

This fantastic series gets even better w/ book 2!

Book 2 in the Dragon Riders of Lon series, continues to build upon the story and is even better than book 1! The characters continue to develop satisfactorily, the world continues to grow more vivid, and the amazing overall story pace is wonderful. This is not a slow book and the pace lends well to this type of story. I would highly recommend in ebook or audio format! Audio Version: The dual narration really brought the story to life and they did an even better job on book 2 as the characters further developed into their own voices and attitudes.

Han Yang does it again

What can I say I love this world. I constantly wonder what my options would be and what I’d choose vs what the characters do. Daniel’s voice is so smooth and buttery I’m adding him to my must buy list for narrators. My only problem is that I wish it was longer. I never wanted the story to stop

Such an exciting and action packed story with a strong, take no bullshit MC, combined with an awesome narrating team. Well done!!

Great continuation to this story. For me it just keeps getting better and better. This book wasn’t heavy on the LitRPG stats like others were but it made up for it in the telling of a fantastic story.

Can’t wait for the next book in this story.

Fantastic narrators for this series. They really help to draw you into the story.

Well done. Well narrated.  will be looking forward to the next in the series. You should buy this book.

The story remains fast paced so if that bothered you in the first it hasn’t changed. The story progresses well and the world continues to be fleshed out. I enjoy the character development as well.

This is an enjoyable change of pace from a lot of other stories. It’s enjoyably simple and flows great to me. Almost no unnecessary parts or filler and the narrators did a fantastic job.