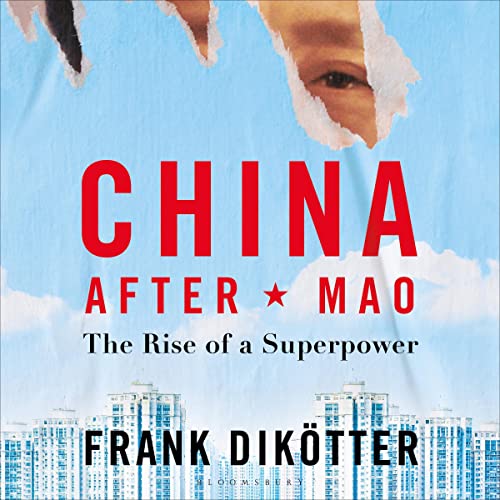 By: Frank Dikötter
Narrated by: Robbie Stevens
Try for £0.00

From the Samuel Johnson Prize-winning author of Mao's Great Famine, a timely and compelling account of China in the wake of Chairman Mao

In China After Mao, award-winning historian Frank Dikötter explores how the People’s Republic of China was transformed from a backwater economy in the 1970s into the world superpower of today. His account is the first to be based on hundreds of previously unseen archival documents, from the secret minutes of top party meetings to confidential bank reports. Unfolding with great narrative sweep, this riveting, richly detailed chronicle recasts our understanding of an era that both the regime and foreign admirers celebrate as an economic miracle.

In charting four decades of so-called ‘Reform and Opening Up’ and China’s emergence as a world power, Dikötter tells a fascinating tale of contradictions and illusions, of shadow banking, anti-corruption drives and extreme state wealth standing alongside everyday poverty. He examines China’s approach to the 2008 financial crash, the country’s increasing hostility towards perceived Western interference and its development into a thoroughly entrenched dictatorship—one equipped with a sprawling security apparatus and the most sophisticated surveillance system in the world. Ultimately, the book concludes, the communist party’s goal was never to join the democratic sphere, but to resist it—and then defeat it.

"A leading historian of modern China. He is a rare scholar, adept in both Russian and Chinese.... Combined with this linguistic skill, Dikötter has a writer's gift." (Evening Standard)

"He combines a vivid eye for detail with a historian's diligence in the archives." (Observer)

What listeners say about China After Mao

Frank Dikötter is, as ever, an excellent voice in the history of China. This book is an excellent addition to his collection, and well worth a read if you wish to understand modern China. However, there are two things that let this audiobook down :

The reader - as has been the case in other audiobooks on China, the reader of this book utterly minces his way through any Chinese word, whether of a province, city or name of a person. I realise it may be a tall order to wish for a native speaker, but the fact that clearly there’s been little to no consultation on the pronunciation of key words is just insulting to the listener - as a Chinese speaker interested in learning some history, the way he fumbles through the non-English words was grating throughout.

The edit - most egregious of all, this may be the worst edited audiobook I’ve ever listened to - there were 13 occasions in the book that I counted where it simply hasn’t been checked for errors, as the audio cut out and stuttered. Clearly an edit error in a rushed production. The idea that any company put this up for sale is a joke.

In summary - an excellent book, but don’t waste your money or credits on this audiobook - just buy a copy of the book.

Great audiobook for Chinese issues in 2022

I enjoyed this audiobook a lot. the author Frank Dikötter brings the history perspective to me