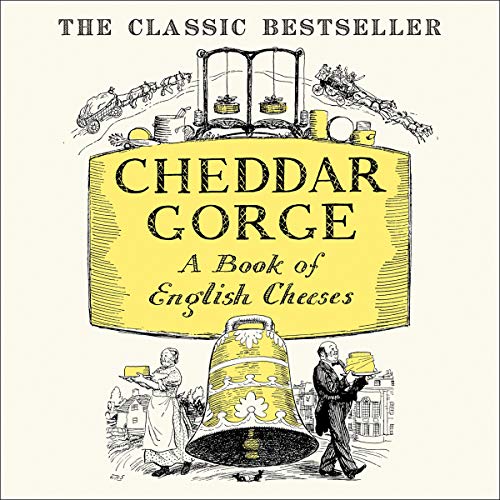 By: John Squire
Narrated by: Robert Portal
Try for £0.00

Where can you read about a monstrous cheese big enough to hold a girl of 13 inside? Or that the invention of the bicycle directly, and poorly, impacted sales of cheddar? Or that some of the first cheese makers hid gold coins inside their wheels of dairy as a sales tool?

Brethren, the writer calls you this because he hopes that you are ‘cheese-minded’ like himself.

This classic and charming book, a timeless love letter to English cheeses, was first published in 1937, newly rediscovered. It is a treasure trove of wonderful anecdotes including the tale of the monstrous cheese big enough to hold a 13-year-old inside, the Stilton that purred like a cat and the famous cheese maker in Manchester who selected which Cheshire cheese to sell based on where the mice had been nibbling, ‘as they were the best judges of a good cheese’.

Sir John Squire, a notable journalist of the time, collected together ‘a galaxy of talent’, with the aim of making this ‘one of the most delightful and entertaining gift books that has ever been published’. Each of the distinguished 10 contributors champion an individual cheese, setting forward their passionate and compelling arguments, celebrating the differences and delights of each type. Through their explorations, the chequered beauties of the English landscape unfolds.

It will certainly whet the appetite for English cheese, for that is ultimately what matters most, as, after all, ‘the only way to learn about cheese is to eat it’.

"This is a rare treat, a rediscovered gem. While the stories and history within this book will fill you with a sense of bucolic enchantment, its message about provenance and place is still just as relevant today as it has ever been" (Dulcie Crickmore, Fen Farm Dairy)

"Cheddar Gorge is a delightful book full of fascinating anecdotes that narrate the history of artisan British cheesemaking up to World War II. These stories are of as much interest to cheese enthusiasts today as they were when the book was first published." (Ros Windsor, Paxton & Whitfield)

"A fascinating glimpse of a lost world of British cheeses, at once familiar and wildly exotic. Essential reading for anyone curious about British cheeses past, present, and future." (Bronwen and Francis Percival, authors of Reinventing the Wheel: Milk, Microbes and the Fight for Real Cheese)

What listeners say about Cheddar Gorge