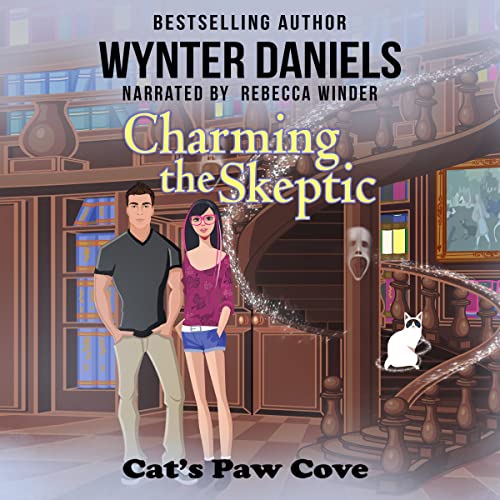 By: Wynter Daniels
Narrated by: Rebecca Winder
Try for £0.00

Paranormal investigator Wade Preston is so sure that anything supernatural is fake, he even hosts a TV series that debunks so-called haunted places. But when the show is in danger of being canceled, he must wow his producers by exposing the most convincing occult phenomenon he can find—Tales bookstore in Cat’s Paw Cove.

Bookworm Astor Carmichael knows magic is real because she has the power to step into the world of any novel, and her mischievous cat often joins her. Ever since her mom abandoned the family, Astor’s frequent jaunts into fiction are a lot more interesting than caring for her siblings and father.

When Wade sets his sights on the supposedly-haunted bookstore, he gets way more than he ever could have imagined. He’d never counted on the possibility that ghosts might actually be real—or that he’d fall for Astor—the beautiful woman who manages the bookstore.

What listeners say about Charming the Skeptic

An enjoyable romance paranormal mystery with many inventive touches like being able to disappear into a book becoming part of the story.. A quick read well written with nice quirky characters and lots of cats. Mostly light until the final section which gets darker. Rebecca Winder is an excellent narrator with a great range and an easy to listen to style.
I received a complimentary copy and am voluntarily leaving a honest review.

There's No Denying the Ghosts

Charming the Skeptic is a delightful installment in the Cat’s Paw Cove mystery series by Wynter Daniels and narrated by Rebecca Winder. This series follows the inhabitants of the small sea side town of Cat’s Paw Cove, which is known for its’ unusual population of witches, ghosts, psychics and more. Several authors contribute books to the series but Rebecca Winder’s are my favorites.

In this book, Wade Preston is a paranormal investigator who arrives at Cat’s Paw Cove to investigate the paranormal activity reported in the town as a means of saving his television series which has been cancelled. In due course, he meets Astor Carmichael, who works at the local bookshop which is known to be haunted. Wade struggles with his skepticism even as he is faced with a series of paranormal events and as his feelings for Astor grow.

This is a cute, clean, paranormal mystery, romance. It is light listening but the story is well developed and the characters are enjoyable and likeable. A number of other inhabitants of the town make an appearance from previous books which is always fun to see that cross-over. A mischievous cat causes trouble. Overall, a very enjoyable listen. I recommend this series, and this book, to those who like a bit of clean paranormal fun with a bit of romance and mystery thrown in.

Rebecca Winder narrates most of the Cat’s Paw Cove books and does a lovely job. She is easy to listen to and distinguishes characters easily. She has a delightful voice.

***I received a free copy of this audiobook in exchange for my own, unbiased, review.***

This is a cute story. Fun listen. The narrator is Wonderful. I would listen to another like this.