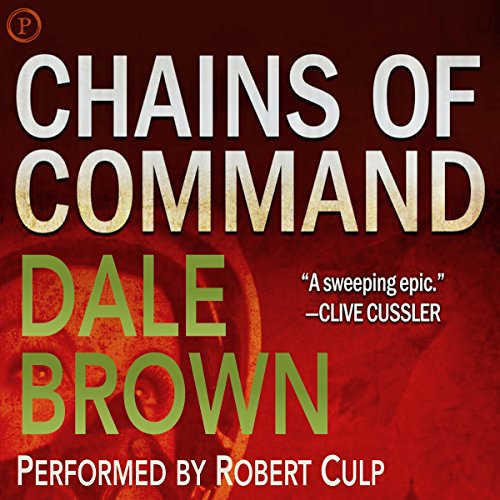 In Desert Storm, Major Daren Mace made a fateful decision to go against orders. To abort a secret mission that was, in his judgment, ill advised. His actions landed him in military exile. Now Mace has moved on to the Air Force Reserves. There's a new US president. It's a new era, and a new war is escalating along the Ukraine border. This time Mace has a partner - Rebecca Furness, the military's first woman combat flyer. And this time the chains of command are tightening around him.

What listeners say about Chains of Command

Good reading of Chains of Command

Really liked Dale Brown's Chains of Command as a book so much I decided to break down and buy the Audible version. Happy I did, just wish there was more sound effects & music in the audiobook. Sure is a good military aviation story that makes you feel like F-111s are going to take on Ukraine and President Clinton + First Lady Clinton are back in charge years later.

he has done good books

Excellent book another trilling story by Dale Brown. From flight of the old dog, Night of the Hawk, Silver tower ect. I highly recommend his books. You won't be disappointed

One of my favorites

This book is one of my all time favorites. I remember listening to this with my Dad when I was little riding with him in the tractor trailer. It was on cassette tape back then. I wish they would publish an unabridged version. The narrator of this was the same as the original I believe. It was hard to hear at some points, had to turn the radio all the way up.

Always enjoyed Dale Brown and his "Crew Dog" experience woven into a story as only told by the real crew could.

This narrator makes the book interesting, and makes you feel like you're part of the story. I was listening and I recognized the narrators voice of a great actor, who is missed. Awesome book! Actors are great narrators and doing multiple character voices.

I did not like the narration at all. The story was very good but the narrator was all over the place with his voice level and speed.

Dale Brown is one of my favorite authors, so I'm sure I read this book when it was first published. The audio production had enough problems to make me wish I could remember the story so I didn't have to finish listening. The volume level on key portions of sentences was too low, while much of the narrative was too loud. Mr. Culp, thank you for putting in the time to learn the pronunciation of so many foreign words, names and place names. On your behalf I double-checked the dictionary for the correct (and only) pronunciation of "ally" -- the emphasis is on the first syllable, and that first syllable is the hard "a" sound, not the soft "uh" sound.