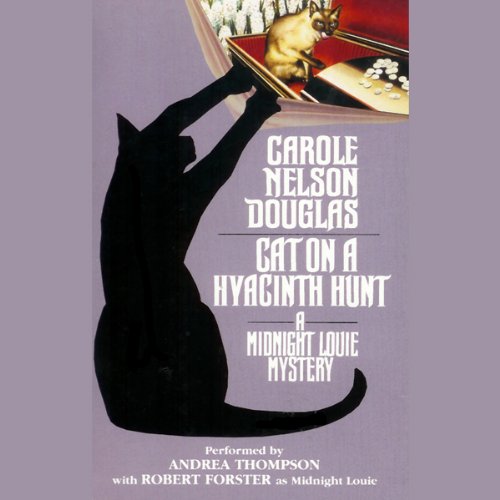 Cat on a Hyacinth Hunt

After a holiday trip to the Big Apple, Midnight Louie returns home to death on the Nile when battling Egyptian barges outside the Oasis hotel cause a dead body to rise to the surface. The soggy victim is well known to Temple Barr, Louie's redheaded, high-heeled human companion. Her two best beaux have been closely involved with the dead man, and both have reasons to want him dead. Maybe now, by finding out which of her beaux is the killer, Temple can finally choose between hand some hotline counselor Matt Devine and mysterious magician, Max Kinsella. And then there are the new girls in town: a sultry lady magician named Shangri-La, who may play a bigger role than anyone might imagine, and her winsome Siamese cat, who may solve Louie's problems by giving him the key to her heart-or the key to solving the mystery.

What listeners say about Cat on a Hyacinth Hunt

Th estory was fine and I've liked this series when I read the books.

What didn’t you like about Andrea Thompson and Robert Forster ’s performance?

Andrea Thompson's narration was too low and not very clear. Robert Forster made a
good Midnight Louie.

Do you think Cat on a Hyacinth Hunt needs a follow-up book? Why or why not?

This is one in a series, so there are additional books.

I didn't realize this was an abridged version; there were parts that would have been clearer if the story hadn't been abridged.

I love cat mysteries. I have read and enjoyed a Midnight Louie mystery before. However, I couldn't make it through this one because I felt how much was missing. You can't do this book well in 3 hours. I will try it again if they come out with an unabridged version.