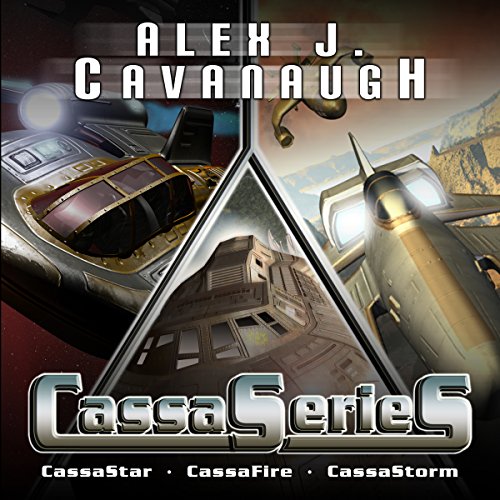 By: Alex J. Cavanaugh
Narrated by: Michael Burnette
Try for £0.00

CassaStar - Few options remain for Byron. Slated to train as a Cosbolt pilot, Byron is determined to prove his worth to his instructor, Bassa. As war brews on the edge of space, Bassa must make a decision that could decide the fate of both men. Will their skills be enough as they embark on a mission destined to stretch their abilities to the limit?

CassaFire - With Byron's days of piloting Cosbolt fighters behind him, the detection of alien ruins sends him to the planet of Tgren. Forced to train a Tgren named Athee and deal with an eager young scientist, he feels invaded. Tensions mount as the ruins reveal a potential weapon, plunging him further into the chaos. All Byron wanted was his privacy.

CassaStorm - Commanding the base on Tgren, Byron watches as a galaxy-wide war encroaches upon the planet. When the war hits Tgren, it triggers nightmares in his son. The ancient alien ship begins transmitting a deadly code and the probe that almost destroyed Tgren 20 years ago returns. The storm is about to break, and Byron is caught in the middle.

What listeners say about CassaSeries

Could if been good but the reading is bad

the navigator audio effects are annoying and distracting. book could be solid, but let's get a better flow.

This is a good series. Plenty of action and I liked the characters. There was no blasphemy in any of the stories. Thank you. I would buy more books from this author. The only downside to these books is the producer's penchant for playing music between each chapter. It adds nothing to the story and can get annoying sometimes.