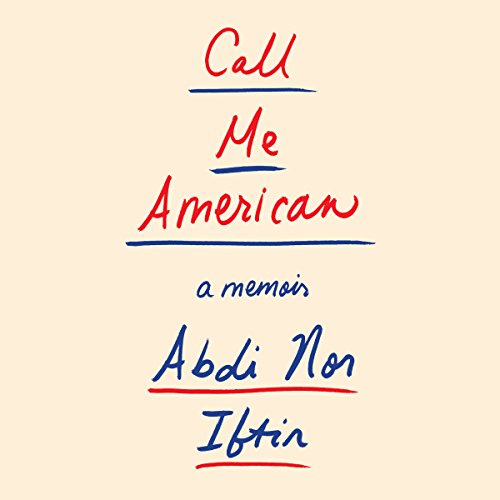 Abdi Nor Iftin first fell in love with America from afar. As a child, he learned English by listening to American pop and watching action films starring Arnold Schwarzenegger. When US marines landed in Mogadishu to take on the warlords, Abdi cheered the arrival of these Americans, who seemed as heroic as those of the movies.

Sporting American clothes and dance moves, he became known around Mogadishu as Abdi American, but when the radical Islamist group al-Shabaab rose to power in 2006, it became dangerous to celebrate Western culture. Desperate to make a living, Abdi used his language skills to post secret dispatches, which found an audience of worldwide listeners. Eventually, though, Abdi was forced to flee to Kenya.

In an amazing stroke of luck, Abdi won entrance to the United States in the annual visa lottery, though his route to America did not come easily. Parts of his story were first heard on the BBC World Service and This American Life. Now a proud resident of Maine, on the path to citizenship, Abdi Nor Iftin's dramatic, deeply stirring memoir is truly a story for our time: a vivid reminder of why America still beckons to those looking to make a better life.

"Absolutely remarkable and always as compelling as a novel… An essential immigrant story, one that is enlightening and immediate." (Booklist)

"[A] wrenching yet hopeful autobiography... Iftin’s extraordinary saga is not just a journey of self-advancement but a quest to break free from ethnic and sectarian hatreds." (Publishers Weekly)

"Iftin's account of his journey does not mince words or attempt to soften the worst atrocities he and his family experienced. Loyal and grateful to his mother, he shows particular sensitivity to the injustices suffered by women in Somalia. Told simply and well, Iftin’s story explains the incredible bravery and hope necessary to live in the crosshairs of war and to find a way out." (Jane Constantineau, The New York Journal of Books)

What listeners say about Call Me American

It so sad to notice how extremist Muslims can ruin people's hopes and dreams. People have the right to pursue their personal goals and succeed in life, even to leave their country for better opportunities. Everyone has the right to choose what's the best for them and their families.

Sometimes we cant even imagine the lengths through which people have to go through to make a better life for themselves. Because of Abdi's courage and unshakable faith I am a stronger person... I no longer take for granted the privileges that have been afforded to me by my predecessors...

Understanding both sides of immigration

I think the book does a great job on providing perspective not only from immigration issues but the need to have stronger vetting and at the same time allow for Refugee immigration. there is a sweet spot and they both can coexist. But allowing extreme reaction on either side is also not helpful. great book great insight. Motivational and shows the benefit of positive thinking.

Call Me American is the life of a Somali boy and his family as they struggle to survive in Somalia during the civil war, fall of government, and the rise of Al-Shabaab and the restrictive life imposed on the citizens. Abdi ability to create a world through his words I felt as if I was next to him as he grew and became a man who won opportunity to come to America with a visa and green card.

He also gives us some chapters about the struggle to find his place in America. His challenges in becoming American and yet be a Muslim during a very prejudiced and ignorant time in the United States.

Thank you Abdi Nur Iftin for sharing and allow us to see through your eyes and understand through your words how things were in Somalia during the 90’s and on. I wish your family health and well being. In time I hope that change will continue to happen and the United States will continue to evolve so that your brother and others may get to live in a country where Freedom is cherished, celebrated, and fought for and endured for us all.

A beautiful and engaging story

I live in Maine and often see Somali immigrants. This story gave me an appreciation for the hell these people have escaped and most importantly underscored our common humanity. It is the remarkable story of a remarkable man, the son of nomadic camel herders whose keen intelligence and singular drive brought him to a successful, productive life in Maine. I could not put it down!

The narration was awesome, with the epilogue narrated by the author. Very interesting account of life for this Somali refugee including the focus on violence after coming to USA, at least partly due to PTSD.

Amazing and heart touching story. This is a must-read for anyone with refugees in their communities. I’ll be buying a copy for each of my kids.

Welcome to America, Abdi Nor Iftin!

What a great book

This book is a triumph of the American spirit, and is one that everyone should read

This was a great book to listen to. I couldn't stop listening to his story and how much he experienced.

The story is as compelling and I learned a lot about it. The narrator was great too.

It’s a heroic story of survival, childhood, resilience, manhood, hope, compassion and love. I recommend it for every refugee. It’s story that can bring healing to all wounded souls of children, women and man from war torn countries.