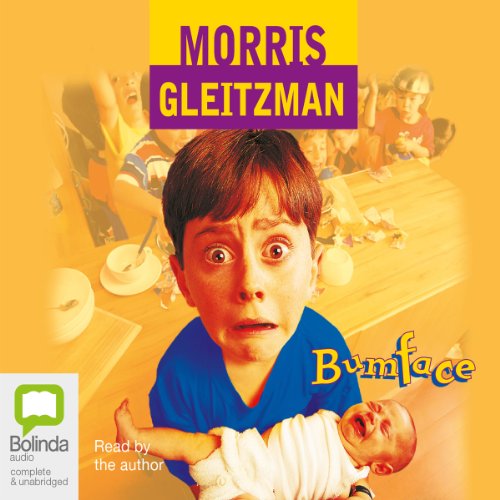 By: Morris Gleitzman
Narrated by: uncredited
Try for £0.00

Angus Solomon, 12, aches to be a fearless and free pirate like Bumface, hero of stories he tells his younger brother and sister. But he can’t. He has to mind them while his mother is busy being a famous television mom. His father and stepfathers have other kids, too. It’s a sad situation turned kooky when Angus also chases after a part in the school play, plots to keep his mom from getting pregnant again, and struggles to keep a new friend, Rindi, from an arranged marriage with a much older man in India. Morris Gleitzman, notably honored for his books for kids, as well as his internationally acclaimed novel, Two Weeks with the Queen, delightfully performs his own work.

With characteristic wit, Morris Gleitzman reads this unpredictable, hilarious and finally moving story about kids trying to make sense of an adult world.

Morris Gleitzman's brilliant comic style has endeared him to adults and children alike and made him one of Australia's favorite authors.

Bumface! That's who Angus wants to be. He dreams of being bold, brave, wild and free. Like the pirate in the stories he tells his younger brother and sister.

Instead, Angus is just plain tired from changing nappies and wiping food off walls. His mum calls him Mr. Dependable, but Angus can barely cope. Another baby would be a disaster. So Angus comes up with a bold and brave plan to stop her getting pregnant.

That's when he meets Rindi And Angus thought he had a problem before...

What listeners say about Bumface