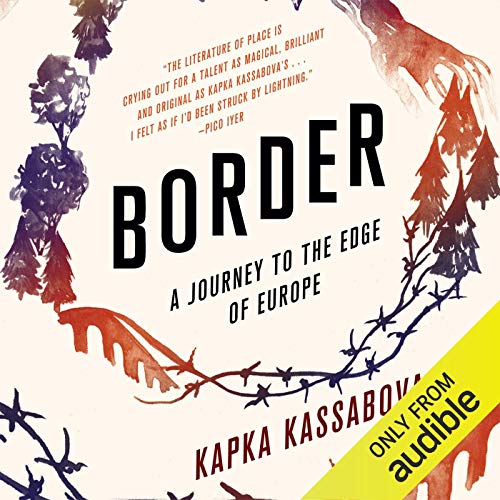 By: Kapka Kassabova
Narrated by: Corrie James
Try for £0.00

Winner of the 2017 Saltire Society Scottish Book of the Year

Short-listed for the 2017 Baillie Gifford Prize for Non-Fiction

Short-listed for the 2017 Gordon Burn Prize

When Kapka Kassabova was a child, the border zone between Bulgaria, Turkey and Greece was rumoured to be an easier crossing point into the West than the Berlin Wall, so it swarmed with soldiers, spies and fugitives. On holidays close to the border on the Black Sea coast, she remembers playing on the beach, only miles from where an electrified fence bristled, its barbs pointing inwards toward the enemy: the holiday makers, the potential escapees.

Today, this densely forested landscape is no longer heavily militarised, but it is scarred by its past. In Border, Kapka Kassabova sets out on a journey to meet the people of this triple border - Bulgarians, Turks, Greeks and the latest wave of refugees fleeing conflict further afield. She discovers a region that has been shaped by the successive forces of history: by its own past migration crises, by communism, by two world wars, by the Ottoman Empire and - older still - by the ancient legacy of myths and legends.

As Kapka Kassabova explores this enigmatic region in the company of border guards and treasure hunters, entrepreneurs and botanists, psychic healers and ritual fire-walkers, refugees and smugglers, she traces the physical and psychological borders that crisscross its villages and mountains and goes in search of the stories that will unlock its secrets.

Border is a sharply observed portrait of a little-known corner of Europe and a fascinating meditation on the borderlines that exist between countries, between cultures, between people and within each of us.

What listeners say about Border

A fascinating guide to this part of the work

This book is full of great stories and and details of the history of the border region between Bulgaria, Greece and Turkey. Fascinating insights and some very funny moments. It's given me a new perspective on this part of Europe where so many cultures have intersected, with a history that is incredibly rich, yet also violent and traumatic. Corrie James is an excellent narrator, I love hearing her voice

Beautifully written and very well read. Do yourself a favour and take the time to read or listen to this. Fascinating and quietly profound. For once the reading chimes perfectly with the text.