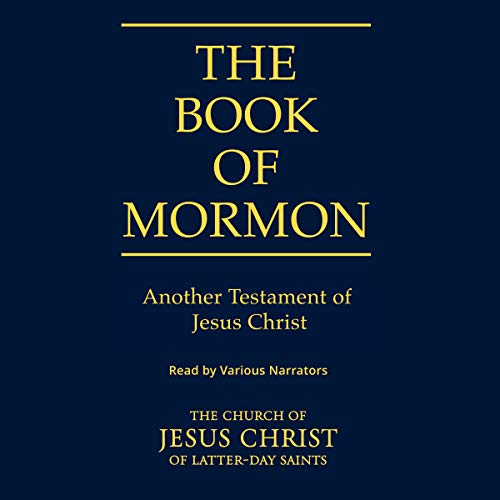 The Book of Mormon

By: The Church of Jesus Christ of Latter-day Saints
Narrated by: full cast
Try for £0.00

One of the four volumes of Scripture accepted by The Church of Jesus Christ of Latter-day Saints. It is an abridgment by an ancient prophet named Mormon of the records of ancient inhabitants of the Americas. It was written to testify that Jesus is the Christ.

Concerning this record, the Prophet Joseph Smith, who translated it by the gift and power of God, said, “I told the brethren that the Book of Mormon was the most correct of any book on earth, and the keystone of our religion, and a man would get nearer to God by abiding by its precepts, than by any other book” (see the introduction at the front of the Book of Mormon).

The Book of Mormon is a religious record of three groups of people who migrated from the Old World to the American continents. These groups were led by prophets who recorded their religious and secular histories on metal plates. The Book of Mormon records the visit of Jesus Christ to people in the Americas following his resurrection. A 200-year era of peace followed that visit of Christ.

What listeners say about The Book of Mormon

I have read the Book of Mormon many times and listened to it on another device but on audible I can pick up where I left off , I love that feature! The narrators have calm melodious voices just right for this type of Book. If you haven’t read the Book of Mormon before it is a history of ancient people in Jerusalem in 600 BC and begins with a a man called Lehi and his family and the story of their journey to America. The Book continues to tell Lehi’s story in America or the promised land and that of his descendants their troubles and wars with the native Americans and how they overcome trials by their great faith in Jesus Christ
It is a book of scripture and a history book but a great book to listen to

Wow. Go and see the play instead 😂

Could only bear an hour or so. 👎

A truly wonderful and amazing book!

As the title states thisbis another testament of Jesus Christ. This book will help you come closer to God and Christ if you live by it's teachings!

My first run through has been an experience. Looking forward to lis t ending many times over.

I'm an inactive member who enjoys listening to audibles. I decided to listen to the Book of Mormon as I'm a truck driver and have a lot of time on my hands to listen to books. I think the performance of the book is great. They did a good job on it.

Loved the multiple readers. Listened at 1.5. Loved it. Listened to many others and this is the best one by far.

Having different voices helped so much! you can follow the information better when its broken up like this.

Reading will keep you on the edge of your seat

Complete twist at the end did not expect that at all. Tastefully written. Will gladly wait for part 2.

I know this Book is true

Thank you for doing a great job narrating The Book of Mormon and making it available on audible.

I know that God lives that Jesus is the Christ and that this book will bring you closer to Jesus Christ. The Bible and The Book of Mormon both testify of his great glory and of his Gospel. Listen to and read this book and I promise if you pray about it asking God if it is true and you will receive an answer from the Holy Ghost that it is. I know that Joseph Smith was called as a prophet like prophets of old to restore the gospel of Jesus Christ to the earth in these latter days. I testify of these things and say them in the name of Jesus Christ amen.

I am closer to Christ after listening and reading.

There is no better book if you have desires to learn of Christ and how to draw closer to Him and our Heavenly Father. The Holy Spirit will guide every honest seeker to great truths.

would have preferred to have actual chapter titles

would have preferred to have actual chapter titles. chapter numbers were off and made it hard to follow.

Great Book and an Even Greater Message

The Narration was excellent at reading religious text appropriately for a listening audience. The messages of love, hope, charity, faith, and repentance give any listener of any theology something of value to improve their own lives. This was my first time through the listening experience and will probably become a repeat favorite!

Great content for all seeking truth and knowledge. Even for those non-religious people wanting to broaden their understanding of history and the world.

This book will change your life if you let it. The Book of Mormon testifies of Jesus Christ and inspires the reader to believe in Christ, repent, be baptized and follow Him. The result is joy, peace, love, and hope! I love it!