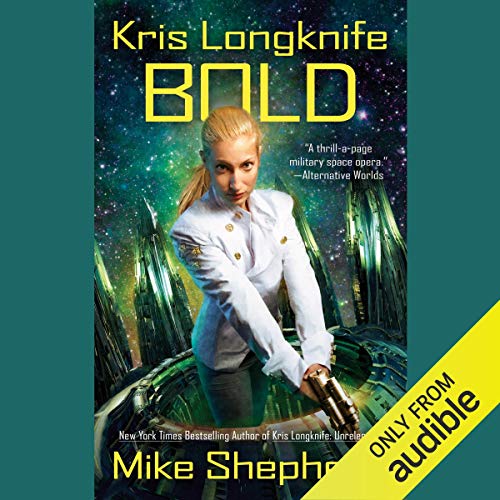 Kris Longknife "can kick, shoot, and punch her way out of any dangerous situation" (Sci Fi magazine), and her latest adventure in the New York Times best-selling series is as perilous as they come.

Despite her role as a fleet admiral and protector of a planetary system, Kris is still beholden to her great-grandfather King Raymond's commands. She has been personally selected for a mission that will, should she succeed, save millions of lives.

The Peterwald Empire is in the midst of civil war. On one side is the tyrannical empress; on the other is the last person Kris ever wants to see again: Grand Duchess Vicky Peterwald. Due to their shared history, the emperor believes Kris can mediate between the factions and bring about peace. But before Kris even begins her mission, she survives multiple assassination attempts on her family's home world. Someone doesn't want her interfering in the empire's affairs. Kris immediately suspects Vicky or the empress, only to learn that it could also be a traitor among her own people.

What listeners say about Bold

reconciliation is a wonderful thing

loved the chance we got with Vicky and the rest of human space. its interesting to see what's been going on while the team was on the front lines. The little princess has us all wrapped around her little finger... THIS Author knows how to make peace talks fun! 14 books in and im still loving it

I was beginning to think that Shepherd had given up on the series; but, alas a new book has finally come out.

Kris and Jack are now married and they have a new baby girl named Ruth. They have returned home and King Ray has a new assignment for Kris. As we know from prior books, the Peterwald Empire is in a civil war. Emperor Peterwald has asked for mediation between Vicky and himself. He has asked for Kris to be the mediator. Of course, the evil stepmother is still attempting to kill Vicky and take over the Empire. Someone attempts to assassinate Kris and family even before she leaves to the mediation site. Is it the Empress or someone from her own country?

The story is well written and very fast paced. There is lots of military action including space battles and land engagements. The suspense builds throughout the story and, of course, Shepherd tosses in some humor. I learn a bit about mediation and negotiation techniques from Kris’s mediation team. My favorite character is still “Nellie”. I sure wish I had a Nellie of my own. Shepherd has nicely tired up some of the subplots. The book ending makes me think that this is the end of the series, but I sure hope he continues with the series. I cannot wait to see what happens next to the various characters.

Dina Pearlman does an excellent job narrating the series. I am glad the series has had the same narrator throughout. Pearlman is an actress and audiobook narrator.

Mike Shepherd has done it again! Bold is another quirky, somewhat over the top space opera that pleases every second. Highly recommended and, if it's the finale, it is a fantastic way to end the Kris Longknife saga.

End of a series?

I've enjoyed the Kris Longknife and Vickie Peterwald series of books and this was no exception. I do have to ask, given the storyline and tone if this is not the end of the Longknife part of the story? I saw that because it seems to have a "happy ever after" ending and the resolution of several plot points.

That said, let me say I hope we will have other books in both series.

I have listened to this series a number of time so I hope that there is more to come.

This book ends another story arc - the Peterwald/Alwa saga. A lot of long-standing characters are jettisoned and quite a few new ones show up. Kris now has a daughter, a husband, and a great desire for a desk job. Unfortunately, the universe has other plans as Kris is drawn into the Peterwald civil war as a mediator.

Story: Kris is summarily requested to return home - which she does with infant and husband in tow. Turns out she's been requested personally by emperor Peterwald to negotiate a peace between his wife and daughter. Unfortunately for Kris, the empress would rather just slaughter both her and Vicky and then happily take over the empire. Can Kris protect her husband and child and still help bring peace to a humanity that greatly needs it considering the threat it is facing?

Dina Perlman, the audio book narrator, does an excellent job as always and I appreciate that she has narrated all of the Longkinfe series to date. As with the previous books, you know what you will get here - it's not high sci fi but it is bubble gum space opera that is especially good when narrated since it is easy to follow.

How did I listen to the previous Longknife books

I hadn't taken a break from the Longknife series and just listened to Bold (one book TOO many). It is wretched--far far in the future but cars still use roads, tires, and gasoline (we have electric cars right now). Woman are not considered equals to men. The lives of entire planets hang in the balance and the hero is worried about what food to serve. Comments about sex that sound pre-adolescent.

It continues in this same banal ridiculous manner for many hours.

Definitely the most poorly written and thought out book I have listened to in the last 12 months. There are so many amazing books on Audible. This book (heck this entire series gets worse and worse with each book) is NOT one of them.

Leadership develops with time and hard work. it leads to tyrany or stewardship. Only rarely, the latter.

Like most the books in this series, there's WAY to much CRAP in this.
This is like a Robert Jordan book, but with more irrelevant rambling..

Love the narrator and the series, however....

Love the narrator (I often look for other series narrated by Dina) and I have enjoyed the series, however, this putting wasn’t as interesting and the recording was bad at the start sounding like it was recorded in a metal box for the first few chapters