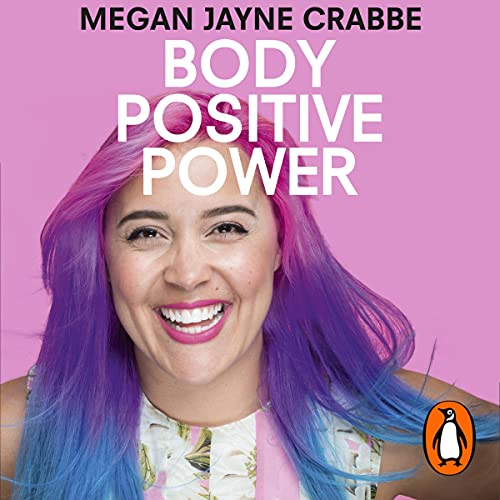 If you're tired of being at war with your body, then this audiobook is for you.

We've been convinced that happiness is something that comes only once we hit that goal weight, get those washboard abs, shrink ourselves down and change every part of ourselves. We believe that our bodies are the problem, but this is not true. It's how we've been taught to see our bodies that's the problem... it's time for us all to stop believing the lies we've been fed about what it means to be beautiful and take our power back.

Megan's body image issues began when she was five years old. She spent her childhood chasing thinness and at 14 found herself spiralling into anorexia. After recovery she spent years dieting, binging and losing and gaining weight. But then she found body positivity, quit dieting, and finally escaped the cult of thin. Now she's determined to let as many people as possible know the truth: that we are all good enough as we are.

With her inimitable flair, whip-smart wit and kickass attitude, Megan argues for a new way of seeing ourselves and a world where every body is celebrated. Where there is no such thing as a 'bikini body diet' and 97 percent of women don't hate the way they look.

A powerful call to arms as much as it is inspirational and practical, this audiobook is the life-changing answer you've been looking for.

So i'm 44, and I nearly didn't listen to this book, due to the young beautiful rainbow-haired girl on the cover - what could she have to say to me? Oh god i'm so very glad I did. Every human should read, or even better, listen to what this person has to say. Its fundamentally life changing. Oh my obsession over looks, food, body and the constant thinking and worrying about what others think. I cried listening to this. I cried for all the wasted time (DECADES) and energy put into obsessing about not being good enough. I cried for all the sabotaged romantic relationships, the friendships lost, the thousands and thousands of pounds wasted clothes shopping to try and find 'flattering' ways to cover my body, and I cried for the real talent for art I pushed aside in favor of endless shopping.

When I was absolutely fantastic as I was - all along.

Megan Jayne Crabbe I thank you for taking the time to share your story, and all your research. And for being such a badass woman. And changing my life forever. Thank you.

Never, EVER, has a book made me feel so empowered!

I have been struggling with body image issues since I was 13, and was only last year given therapy for it (I'm 24). This was because I thought it was normal, and that everyone else thought like me; that it's completely normal to hate yourself to tears every day, to count calories like your life depends on it, to break down in every dressing room ever, to actively avoid every reflective vertical surface ever, to eat dodgy weight loss pills from the internet, to exercise to you vomit, to fantasise about cutting away pieces of your body, to lash out at everyone because you feel fat that day...

And as it turns out...... many girls think like me(?!?!), and it's an epidemic! and it's bad! Meghan spoke right to my heart, though her real-life stories, and the chapters written by others who had been fighting the same fight. She brought me to tears with the chapters of her experiences with ED, and the impacts that had on her and her loved ones.

What I enjoyed the most was how she went about stripping down diet culture to its bare bones, with such ease and humour (albeit irony and sarcasm haha). What I didn't enjoy was waking up and realising I've been fudged over for the best part of my teenage years, for some old white men somewhere to earn money on my misery. I am never getting those years back. I'm never getting that holiday back where I did nothing but fret over the lack of caloric data on the freshly prepared food I was eating. I am never getting back those hours in front of the mirror.

Another thing that made me sob was how she talked about the messed up system where you have to be a certain weight to be eligible for help, like
"you aren't thin enough for us to validate your cry for help." <--- this sucks!

This book is going to make you feel a lot of feelings! (and mind you I used the audiobook version on the bus...)

But what made me feel so incredibly empowered is that now I know what diet culture is about, I know how it works. I always knew something felt off, and now I know it isn't me. It's that 10 calories, appetite suppressant, metabolism boosting weight loss shake in the corner... And I am a unicorn and you all better believe it because Megan said so.

Please please read this book, even if you have always loved yourself and you already feel a million bucks. It's a great read, and very entertaining!
(PS: if you know someone with eating disorders it's a good read if you're looking to being supportive of that person. Also if you're in recovery this book gives warnings before passages with potentially triggering content.)

I listened to this book within 2 days. Megan, is great reader, and really brought her words to life. I've always been interested in Body Positivity, and when I started this book, I felt that I knew what it was about. This book taught me a lot; it opened my eyes to a world of ignorance that I had been unaware of surrounding eating disorders, it made me laugh when she spoke about "diet cults" and it brought me to tears, making me realise that at one point in my life I was so obsessed with my weight that I was within the realms of an eating dis-order. I follow Megan on instagram, and I have to say I don't agree with 100% of what she says, but I do agree and support about 98%.

If you have ever hated your body, felt that you don't fit in, dieted to the point of depression or have never understood how people take diets to the extreme (to the point of anorexia or worse), then this book is a must read. Thanks Megan!

So deeply resonant and helpful

Anyone who is struggling to come to terms with themself in this world and realise that they are enough, needs to listen to this

Every single person needs this book in their lives!

Wonderful mix of truth bombs, insightful media critiques, practical advise and honest personal pieces from both the author and other inspiring badass babes! The author doesn’t patronise the reader, but presents a very understanding, inclusive tone that takes feelings of shame or guilt away from the listener. I loved this audiobook, Megan narrates very well with great character and personality in her voice. She effortlessly takes the audiobook from feeling like a conversation with a supportive friend to powerful inspiring statements and passionate declarations, and everything in between.

This book was great and loved Megan reading it. It did get a tad repetitive towards the second half but I really liked it.

good points but quite lengthy

I love the body positivity movement and Megan's voice is perfect for listening to but I did find a lot of chapters quite repetitive and lengthy which lost the punchiness of the message to me.

a must read (or listen)

Would recommend to all women (and men) whether you've experienced body issues or not. It's eye opening about how society and the individual has got to the place it is now with regards to body dysphoria

Not enough stars for this book.

This book is so amazing - Megan is such a wonderfully strong and intelligent young woman and will make you laugh, cry and want to hit things when you realise how we have all been taken into diet culture and its related negativity. Her voice is pleasant to listen to and she is highly articulate. I'm going to listen to it all over again now.

I loved this book. Megan tells the hard, fucked up truth, but with so much love and compassion. I fell in love with her, and everyone in the world. And I'm also furious. Furious and filled with love.

It's inclusive, intersectional, feminist and fun! And it has changed my life.

One of the most important books I’ve listened to

I have nothing bad to say about this book. I will try to become a member of the body positivity community. Starting right now!!

Everybody should hear this book!

I really love this book and whould recommend it to everyone I know. i think the topic is extremely relevant, even just to give an understanding on how the standards on bodyimage can have an effect on all types of people.

thank you so much for writing this book.

Surely one of the most important, soul warming and healing books of my life.
Thank god for you, Megan Jayne Crabbe.