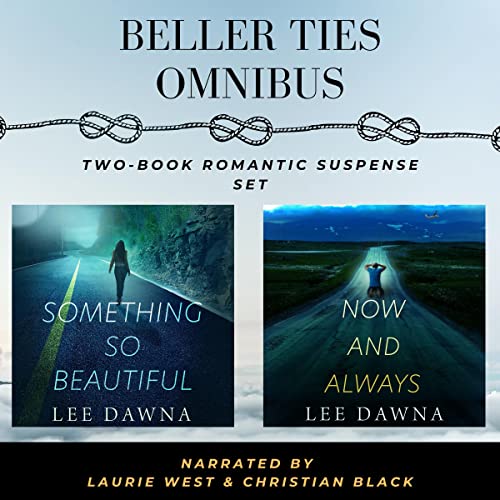 By: Lee Dawna
Narrated by: Laurie West,Christian Black
Try for £0.00

Beller Ties is a thrilling romantic suspense book set featuring four different members of the illustrious - and wealthy - Beller Family. This omnibus collection includes the first two books in the set: Something So Beautiful and Now And Always.

When green-eyed charmer John Beller breaks through the chaos of her life, offering all the fruits of lust and love, 32-year-old Mary Williams desperately wants to partake. On the verge of a mental break where footsteps echo from empty rooms and constant phone calls have no one on the other end, she craves the peaceful embrace of John’s arms. But the confident man is demanding, and he’s digging into secrets she has no intention of letting anyone find out about.

When an insane driver intentionally forces her car off the road and leaves her for dead at the bottom of a ravine, she wakes to find herself hospitalized, then forced into confinement at John’s house. And in his house, it’s his rules. But is he isolating her for her protection? Or using her injuries against her?

One thing is certain - her nightmares are real. And the more John kisses her, the closer the threat looms.

Avery Kingwood’s marriage crashed and burned…on his honeymoon. After finding out his wife Cassie’s devastating truth, she forces him to sign a separation agreement - more like a gag order. Unable to say what happened to his marriage, Cassie expertly manipulates Avery’s entire family against him. All he’s got left is his father’s business, but even that tie to his family is troubled.

Broken, Avery unexpectedly finds something that gives his life renewed meaning and hope: Sheila Beller. Perfect, well-respected, charming - and untouchable. She wants nothing to do with divorced men, and he’s worse than divorced - he’s married.

While convincing Sheila he is a man she can count on, Avery keeps his secrets close and his lies relegated to omissions. But Cassie is out for blood and Avery’s only hope for love is slipping farther away by the second.

One thing is certain: The only thing worse than lying is finding out the secrets you’re protecting aren’t the truth at all. And the more Sheila clashes with the Kingwoods, the more unfathomable the truth becomes.