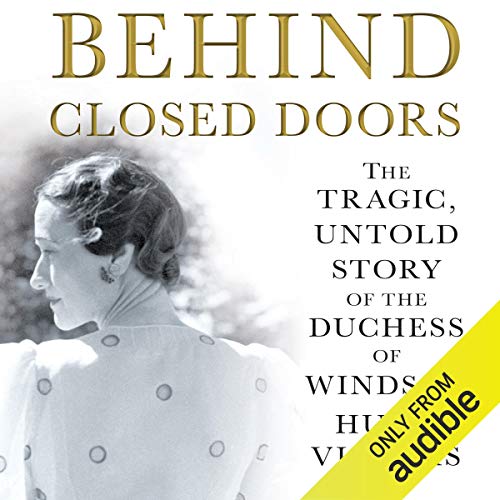 By: Hugo Vickers
Narrated by: John Telfer
Try for £0.00

The life of the Duchess of Windsor came to an end in Paris on 24 April 1986. She was almost 90. Many people assumed that she had died years before, since she disappeared from public view for over a decade. Sebastian Faulks wrote in the Sunday Telegraph, ‘She is seen as no more than the star of an old romantic film that most French have forgotten.

’But the world did take note, describing her death as the final curtain on one of the greatest love stories of the twentieth century. The story of the Abdication was retold, embers of the feud between the British Royal Family and the Windsors in exile were fanned once more, and there was increasing speculation about the many historical treasures owned by the Duke and Duchess, in particular her jewels.

Hugo Vickers has followed the unfolding saga of this tragic couple since he was a young man. And, with the help of previously unpublished papers and personal testaments, he now brings a whole new perspective to the story. In particular, Vickers focuses on the last years of the Duchess of Windsor, revealing the cold truth about the ruthless exploitation of a vulnerable old woman by an unscrupulous French lawyer called Suzanne Blum.

Behind Closed Doors is a potent mixture of detective story and revelatory royal history. Hugo Vickers combines meticulous research with an intense fascination with his subject to tell a tale whose dramatic impact has only increased with time.

What listeners say about Behind Closed Doors

What a sympathetic and clear work on the Duchess of Winsor's life and decline after the death of the Duke. Most people see, and saw, her as a very tough and grasping woman. But this well crafted book shows another Duchess for whom the listener seen to have sympathy for, I must admit that I wanted to rush in at times to help rescue her.

I like many others believed she was a status hunter thus book changed my view ,

You Reap What You Sow

I just finished reading That Woman, and was curious to learn more about Wallis and Edward in exile. This couple never looked happy to me, and I suspect that he only used this woman to relieve himself of being King, a job he never enjoyed. No love there to make your wife the most hated woman in England.
I suspect that had they had inkling of how ostracised they would be in their new life he might not have abdicated. The most startling revelations in this book are the chapters dealing with the Duchess after Edward died. Poor of health and isolated from all her remaining friends, she is a virtual prisoner of her staff and lawyer. Who rob her blind.
Not a great love story at all, but a tragedy of Shakespearean proportions.
This is a thoroughly well researched book and dispels much of the nonsense and innuendo that have followed this couple.

Trying to make a heroine where one didn't exist.

I think the reader is supposed to feel sorry for the Windsors and the mess they made of everything. The book comes across as empty as its subjects.

The end of the Affair

This is a very accurate and sad account of the dishonest lawyer who overtook the life of the Duchess of Windsor and her money.

The Book of Agony

What would have made Behind Closed Doors better?

Strong editing that would have excised massive repetition and eliminated many useless pieces of information, speculation and invention.

Has Behind Closed Doors turned you off from other books in this genre?

Not really but I certainly will not read anything else from this author....though I suspect he has no other books of purported insider knowledge.

This is subtitled "The Book of Agony" because it was a tortured tale that could have been successfully told in one hour or as a short story. There is endless repetition and irrelevant, agonizing detail that is more properly Appendix material for those who care about such minutiae The people are pathetic, selfish, hopelessly helpless and shamefully weak. The author wishes her knew more or that he was somehow actually connected in their story, but is clearly only an obsessed researcher. There is no romance nor levity in the story of this story of the personal relationship of the Windsors but rather a depressing and frustrating tale of friends and royalty who stood back and did nothing to help or protect a friend or the important artifacts and papers of the former King of England. Compounding the situation is an avaricious and bloodless attorney who stole and dissipated the Duchess' assets.

I never give up on a book while listening in hopes that there is some redeeming aspect but in this case, there is no reward here for the hearty optimist. Certainly, while some books are better than others, this one is way behind the pack and is a waste of time.

I like the narrator. The book started out strong but I didn't feel that the life stories of some of the people surrounding the duchess were necessary. Intervening overall and well read.

Very hard to get through. I found myself using it like Sominex, because it was so dry it put me to sleep. No secrets here...like I said: nothing new. Obviously written by a fan of the Windsors who viewed them as these huge victims rather than the captain's of their fates.

His voice is a bit monotone. Could put you to sleep.

The subject matter is what caught my attention because I love their story. However, the book is so incredibly boring I couldn't get through it all.

Nor saint nor demon, but a flawed human being, Vickers brings The Duchess of Windsor to life in her many shades of being.

Book one has too much French

Book 1 ..way too much French. Was this about Metra Blum or the Windsors?
Very little here that we didn't know.
One wonders though with modern medicine how they would have fared.
SO WHERE DID THE MONEY GO ?

Of course a compelling subject, but I was distracted by the narrator's very flowery and overly pronounced French. Making things worse, in most cases, there was rarely a translation made to help us out. The editing was not the best - but if things like that don't get on your nerves- enjoy.