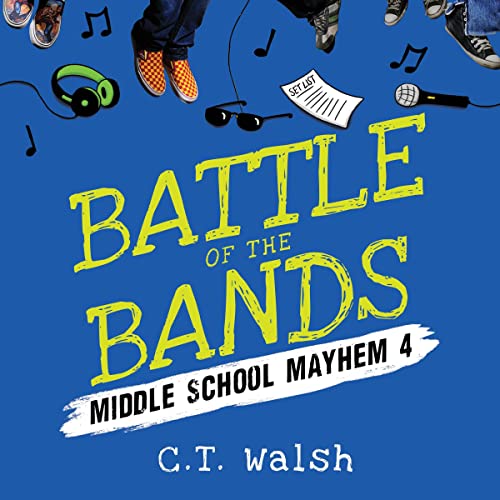 Battle of the Bands

Austin Davenport is back in the mayhemiest adventure yet! Austin's world is forever changed when he learns that nerds have one chance to transform themselves into cool kids. And that's by starting a band.

When Austin and his crew get fed up at being even less popular than the kid in the marching band who wears his shoes on the wrong feet, they decide to take matters into their own hands.

When Randy Warblemacher, already a popular kid (and Austin's nemesis) starts his own band that overshadows Austin's, the battle is on! And it's not just with Randy! Some of the area's best bands are in on the action: Goat Turd; 64 Farts, and Cold Sore are all looking to come out on top!

Join Austin and the gang as they search for and express their badditude. Will the nerds rise to superstardom? Will fame and greed tear the band's friendship apart when half the band falls for the same girl? Will Austin's best friend, Ben, overcome his horrific stage fright? Will Austin split his leather pants and forever scar the youth of America?

Middle School Mayhem: Battle of the Bands is the hilarious fourth installment in this planned 12-book series. This fast-paced and gut-busting series is designed for middle grade and younger YA listeners.

What listeners say about Battle of the Bands

Great, but has to many fart jokes

The book is great overall and C.T Walsh does a great job, but should tone down the fart jokes