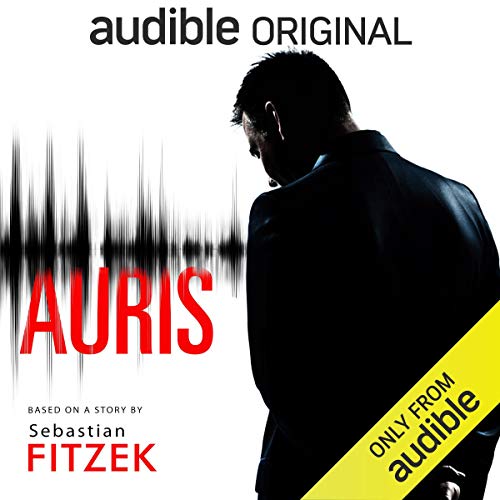 By: Vincent Kliesch,Sebastian Fitzek
Try for £0.00

What listeners say about Auris

Can't wait for the English version of Auris 2 & 3!

Once I started listening to it, I just couldn't let it stop! There might be some details in the story that aren't too "reasonable", the story is still full of excitement with its twists and turns.
I have to admit somehow I have guessed the culprit behind everything, yet the truth is no less stunning than it is.
I couldn't help searching for its sequel right after the last episode ended, pity only the German version was available. I hope the English version could be produced soon enough! I just can't wait to listen to it!

nice thriler and mistery...like this kind of book and thanks for the free book...apreciate all team

Good story but some poor acting

Overall I enjoyed the story but the male lead was so wooden at times that it was painful.

This is so bad it almost feels like a pastiche. Unfortunately, it's not even good enough at being bad to be that.

The narrator gives it big licks in a noir style, but the words don't match. The writing is clunky, overly formal, has no actual voice. As the title says, it feels like someone is delivering a PowerPoint presentation in a Dick Tracey accent.

The acting is bad. Really bad. They are sometimes surprised by the sentences they are reading, half way through. Maybe that's the moment in dawns on them how bad this is.

I listened to episode 1 and only carried on to the end of it so I could write this review. Thanks, but no thanks.

Also, this isn't free. It's paid for by our subscriptions. It's preferable to the badly delivered self help that's been served up lately, right enough.

It's hard to believe you are the guys who brought us West Cork, the Zeta Family and Karupt FM. Oh, remember those heady days.

oh my, this is so badly written. even for free it's a waste of time and effort. got ten minutes into episode one and had to stop. more free stories audible, but better quality please.

In the style of Baldacci or Deaver's Lincoln Rhyme. Maximum plot twists, high drama after the plot exposition is set up. Good narrator - I quite like the soundscapes, even if it feels like it's trying to drive emotions a bit too blatantly - I still prefer good prose. Very professionally produced. Don't count the amount of 'then suddenly' used!

Ridiculous plot, if you can call it that. Gratuitously unpleasant. Stopped listening well before end.

I listen to a lot of radio drama and have done so for the best part of 50 years. When done well it is a delight. The acting in this is dire. Now, it might be that it was recorded under the exceptional circumstances of lockdown during the COVID pandemic. If that is the case then I would be less critical. But if it was recorded under such conditions then the description should make that clear so that I can take that into account.

The premise of the story is interesting. The acting is, I am sorry to say, so poor that the storyline just cannot survive and I lost interest very quickly.

This story was thrilling, the voice talents and production were amazing. Very much enjoyed.

Much like bad RP from AOL in the 90s, this podcast features many “as if’s “ and “almost like’s “. For the four episodes I managed to make it thru, I just kept asking myself why we have to use first names in every single bit of dialogue and every sentence. Why does the protagonist ask herself rhetorical questions for filler? Why do we need shock-value circumstances? I do not recommend this to anyone who enjoys actual mystery.

We need more of this

Sebastian Fitzec has quickly become one of my favorite authors. The only problem, not enough of his books are translated into English. While this story was not written by him, it was inspired, and only makes me want to read more of his books. That said, it's been two years since this came out, and there's no continuation from the major cliffhanger at the end of it. I really want there to be more of this. It was a fascinating story with a few twists I didn't see coming. Very much worth a listen. the only slight down side were some of the characters casting were ... questionable, a couple odd performances too. But I'd listen to it again, and I'd happily continue it.

the dialog was just terrible and made for painful listening experience.
not sure who translated from German to English, willing to bet he wasn't a native speaker, it felt like a literal translation.

Great story. So glad I stumbled upon this podcast series. I hope there is more to follow.

If you think this story is about someone with an amazing ability, think again - it’s about an entitled, self-centered brat forcing her way into a situation where she is clearly not wanted. I would love to find out what actually happens to Auris, but it’s so painful to listen to her non-stop whining, inept thought patterns and unbelievable lack of care for anyone around her (except as it directly and 100% benefits her) that I just can’t. Seriously, complaining to a man in a prison hospital bed about how bad *her* day has been, when it’s completely the product of her decisions, short-sightedness and hubris? Really? Also disappointing is the ridiculous posturing of her half-brother, who could have been a pretty interesting character. Nearly all of the characters, and most of the ‘action’, is just a waste of time and space. Some of the voice actors might be good; they just don’t have much to work with. Misleading title, misleading description; just skip it and save yourself the frustration.

This was performed beautifully and has a great story line. Def worth your time. Looking forward to part 2.

Loved it for the story line and actors; the sound effects enhanced the story. Suspense and thrilling

This podcast kept me hooked from beginning to end! Really well acted and storytelling, would love to see this have a second season. The twist kept on coming out of nowhere! really recommend this to anyone who loves suspense and crime dramas

I loved the mystery and plot twists. It's good story and kept me hooked all this time.