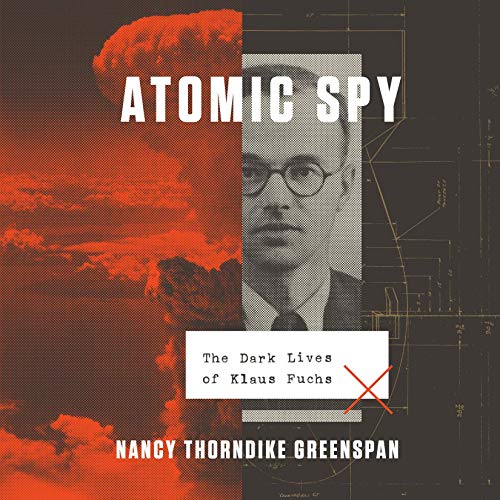 By: Nancy Thorndike Greenspan
Narrated by: Tavia Gilbert
Try for £0.00

"Nancy Greenspan dives into the mysteries of the Klaus Fuchs espionage case and emerges with a classic Cold War biography of intrigue and torn loyalties. Atomic Spy is a mesmerizing morality tale, told with fresh sources and empathy." (Kai Bird, author of The Good Spy and coauthor of American Prometheus: The Triumph and Tragedy of J. Robert Oppenheimer)

The gripping biography of a notorious Cold War villain - the German-born British scientist who handed the Soviets top-secret American plans for the plutonium bomb - showing a man torn between conventional loyalties and a sense of obligation to a greater good.

German by birth, British by naturalization, Communist by conviction, Klaus Fuchs was a fearless Nazi resister, a brilliant scientist, and an infamous spy. He was convicted of espionage by Britain in 1950 for handing over the designs of the plutonium bomb to the Russians, and has gone down in history as one of the most dangerous agents in American and British history. He put an end to America's nuclear hegemony and single-handedly heated up the Cold War. But, was Klaus Fuchs really evil?

Using archives long hidden in Germany as well as intimate family correspondence, Nancy Thorndike Greenspan brings into sharp focus the moral and political ambiguity of the times in which Fuchs lived and the ideals with which he struggled. As a university student in Germany, he stood up to Nazi terror without flinching and joined the Communists largely because they were the only ones resisting the Nazis. After escaping to Britain in 1933, he was arrested as a German émigré - an "enemy alien" - in 1940 and sent to an internment camp in Canada. His mentor at university, renowned physicist Max Born, worked to facilitate his release. After years of struggle and ideological conflict, when Fuchs joined the atomic bomb project, his loyalties were firmly split. He started handing over top secret research to the Soviets in 1941, and continued for years from deep within the Manhattan Project at Los Alamos. Greenspan's insights into his motivations make us realize how he was driven not just by his Communist convictions but seemingly by a dedication to peace, seeking to level the playing field of the world powers.

With thrilling detail from never-before-seen sources, Atomic Spy travels across the Germany of an ascendant Nazi party; the British university classroom of Max Born; a British internment camp in Canada; the secret laboratories of Los Alamos; and Eastern Germany at the height of the Cold War. Atomic Spy shows the real Klaus Fuchs - who he was, what he did, why he did it, and how he was caught. His extraordinary life is a cautionary tale about the ambiguity of morality and loyalty, as pertinent today as in the 1940s.

“Nancy Greenspan dives into the mysteries of the Klaus Fuchs espionage case and emerges with a classic Cold War biography of intrigue and torn loyalties. Atomic Spy is a mesmerizing morality tale, told with fresh sources and empathy.” (Kai Bird, author of The Good Spy: The Life and Death of Robert Ames and coauthor of American Prometheus: The Triumph and Tragedy of J. Robert Oppenheimer)

“Greenspan sheds new light on the character, family, and motives of the notorious spy who gave the Soviet Union a blueprint for the atomic bomb. Klaus Fuchs’s espionage and its consequences raise timely questions about blind devotion to an ideology.” (Cynthia C. Kelly, president, Atomic Heritage Foundation)

“A riveting read. Greenspan skillfully and with nuance describes how one of the Manhattan Project’s prominent physicists, led to Communism by early struggles against Nazism, eventually became a important spy for the Russians. A tale of intrigue, competing moralities and human fallibility.” (Gino Segrè, author of The Pope of Physics and Ordinary Geniuses)

What listeners say about Atomic Spy

Morally revolting -- a player in mass murder cast as a saint

The truth goes down the Orwellian memory-hole in this whitewash of the murder regime Fuchs worshipped like a twisted insane religion.

Would Be OK As A Short Story

The details are overwhelmingly boring; however, the motivation and character of the subject are interesting.

Overall, the book is a very strong profile of Klaus Fuchs. I would say that the meat of the book could have been edited down a bit (feels repetitive at times), and the author could have put more into the epilogue or final chapters that speculate Klaus' state of mind and motivations. Overall, great book for anyone interested in the history of the Manhattan Project, WWII, or the development of Atomic Weapons/Cold War arms race.

One of the best books I have read

I am an 92 yr old retired medical scientist. I have lived thru Klaus Fuchs and his life as a traitor to the US. Nancy Greenspan’s book is amazing for its detailed description of what happened and why. I feel she did amazing research to bring to the reader this amazing man and this amazing book!

This is an amazing story. The book is written with precision and empathy. This story is about the entire life of Klaus and his family. It's a tragic life filled with so many broken pieces that have molded the man and his life choices. I highly recommend this book and the narrator Tavia Gilbert does an excellent read to the listener. You may like me, listen to it more than once to fully appreciate it. I have learned and can begin to understand why and how Klaus became a spy. Before listening to his story, you would probably believe that there should be no reason to forgive him for what he did being an Atomic Spy. When you finish the book, you will understand his choices.
Klaus grew up in a time when German & Russian political challenges were splitting his home land of Germany. The Nazi party was gaining power and the only solution Klaus could imagine was the Socialist or Communist party of Germany. Klaus like so many refugees fleeing Hitler's rein, is eventually sent to Canada along with captured German, Jewish & Russian POW's. Klaus eventually returns to England to become a citizen and complete his education a PHD in Physics. Working for the English, Klaus makes his way to America. First to New York & later to Los Alamos working on the Manhattan Project, on the Atomic bomb. I will stop here. I don't think you will be disappointed in this book, or the author. I am looking for other books now by Nancy Throndike Greenspan and others read by Tavia Gilbert. This is true history that you don't have to challenge it's authenticity. This is 5 stars all the way for me.