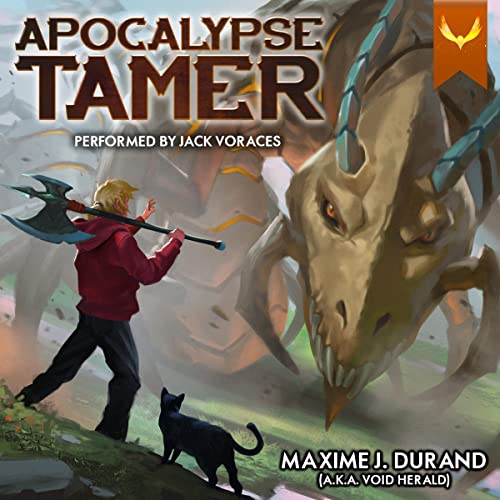 Basil Bohen was asleep when the System arrived and the world changed....

Dungeons suddenly popped up across the planet, summoning invaders and monsters from alternate realities. Ancient gods slumbering beneath the Earth were woken. And all humans were empowered with Levels and Classes gained by, among other things, killing monsters and other humans.

Only a single instruction was provided by the System: “Whoever reaches Level 100 first shall become Earth’s new Overgod.”

So initiated a worldwide battle royale of epic proportions...which Basil would rather sit out. Choosing the [Tamer] profession, which allows him to speak with his cat, Plato, and other apocalyptic monsters, he'll adopt and train them to fight alongside him and defend his corner of the countryside.

After all, why bother fighting the apocalypse when you can tame it?

Don't miss the start of a new LitRPG series from Maxime J. Durand, best-selling author of Vainqueur the Dragon and The Perfect Run. Full of equal parts action and laughs, this story is a satirical take on the typical LitRPG apocalypse stories blended with elements of Pokémon and Monster Rancher.

About the series: Join Basil as he progresses from level one to 100 all while refusing to play by the rules of the System. Able to recruit monsters to join him with his [Tamer] class, Basil grows a party of unique creatures to keep him company in the end of the world. They'll experience dungeon diving, battles, and building a little slice of forest into a defensible base.

What listeners say about Apocalypse Tamer: A LitRPG Adventure

A decent story with bad accent

The story is a decent system apocalypse, but I will echo the other reviews that the MC accent is bad. The worst part is that the narrator has a decent voice and some voices are okay. If only he didnt do such goofy accents

Really easy to listen to and thoroughly enjoyable with some great moments.
Really hoping I get to hear more of the series.
Well narrated too with voices that really suit the characters.
This is my honest opinion on a free review copy.

Could not listen to the book or get into the story due to the terrible narrator, terrible accents

didn't finish the story accents to much

characters were actually pretty good. protagonist was intriguing wanted to get more of him. just couldn't handle bug's voice.

Hard to listen too

Narration is fine but the accent of the MC is just not doing it for me.

Where to begin, the performance is soooo bad and broader line racists. Like imagine a second generation Pakistani speaking with a heavy Indian accent.


Story wise the concept is ok things Inclusion of religion and done badly at that. Then there is the character development which is really done badly..

A pile of feacal matter that is this audio book. Avoid at all cost

Was excited for this, but had to return

It was a battle for me for which of the story's humour, or Voraces narration would do me in.

It was the latter.

I lasted mainly half an hour. The accents of the first few characters are so god awful, one wonders why he even tries at all. Basil is Bulgarian, and on top of doing a terrible accent, Voraces delivers the lines like Basil is drunk while overacting on top.

He also speaks with a weird cadence. The pacing of the dialogue is all wrong, it sounds like Voraces recoded each individual word separately, and an editor did a poor job of mashing them together.


Don't be an idiot like me and listen to the preview. If you're fine with it, only then give this book a go.

I'd sworn off Voraces ages ago, but he slipped by me this time by accident.

My fault, I guess.

narration is not it

theres another review on here discussing the low points of Jack's performance and while I hate to dogpile its spot on. the accents are awful and the pets are straight caricatures in all of the worst ways. I cant really give an honest review of the story cause I will never know it. the narration is honestly that bad.

The narration kills the entire book. The story itself is decent just can't focus on it with the way it is being narrated.

If your going into this and are not a Jack Voraces fan I highly suggest listening to the sample to see if it is for you. Since I do like Jack's voice acting I found the story was fine if hard to follow at times if something loud distracted me in my background. Not sure why all this hate is being thrown at the narrator when they could have listened to the sample
This book seems like it'll have references to all void herald's books because there are some spoilers to the ending of Vainquer and Never Die twice in this book so be prepared

I tried for a few hours, but it feels like the book was written for a very young audience somehow. And yes, the horrid accent destroyed any hope of keeping me interested in the story. Had to return it. Not entertained or captivated.

I will admit that I had hoped we wouldn't be hearing from Jack after he discovered Michael Summerer. so that automatically loses a star for me. But also having him do an accent for the main character is just too much. It just takes away from the story.

Loved the book and I'm loving the audio. The voices are very close to how I imagined them. This is a great take on the genre.

Not my kind of book, but still good

This book has a subtle tone of comedy to the story and the MC is a hermit thrown into a situation he doesn’t want anything to do with. In addition, while the narration is good, they make the MC sound like he is in his late 30s early 40s instead of a 25 year old. These things don’t make it a bad book but it personally isn’t for me.
Also, to whom it may concern, the book has religious elements and beliefs that are brought into question within the bounds of the fantasy setting. If this makes you uncomfortable I suggest you look elsewhere.

Loved the story and loved how Jack Used different voices for each character. It made it really easy to listen to and follow along. I can't wait for the next book.