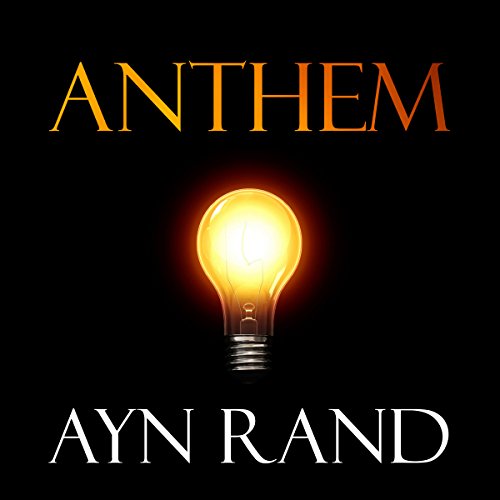 Anthem is a dystopian fiction novella by Ayn Rand, written in 1937 and first published in 1938 in the United Kingdom. The story takes place at an unspecified future date when mankind has entered another Dark Age. Technological advancement is now carefully planned and the concept of individuality has been eliminated. A young man known as Equality 7-2521 rebels by doing secret scientific research. When his activity is discovered, he flees into the wilderness with the girl he loves. Together they plan to establish a new society based on rediscovered individualism.

Rand originally conceived of the story as a play, then decided to write it for magazine publication. At her agent's suggestion, she submitted it to book publishers.

What listeners say about Anthem

A little teaser to her real beauties. Worth listening to simply to trigger the thought that a world of collectivism is worse than a dictatorship.

A quick and thought provoking experience

In a short time the listener can be introduced to a Writer that has caused so many debates among
intellectuals and observers of society.

Take a listen and get a taste of a brilliant mind.


The Narrator did a good job with the material.

Once we've lost everything we're free for anything

We have all seen dystopian movies and this plays out just the same. There are a number of stories and movies that replicate this style of future. The loss of individuality is not something that we should ever want to see and this story provides a bleak future where that is the case.
Ayn Rand is well known for her thought provoking books. This is a great one to get you into her philosophical stories and get you used to her style before you venture into a longer one. For this story I was happy with the length. I think it could have easily turned confusing or boring if it were much longer.
Jimmy Kiefer did a great job. I have to say that the story didn’t lend itself to dramatic reading and Jimmy was able to keep my attention the entire time.
I was voluntarily provided this free review copy audiobook by the author, narrator, or publisher

I read this in high school and I never forgot it. It was a book that changed my perspective on how to watch for people who want to be in power over me and all people. Once people get that power, they don’t want to give it up. She knew first hand what it was like to live in a communist country and tried to tell people about it.

Excellent narration. I felt like Equality 7-2521 was telling me his story.

A classic, though incomplete

Am a huge fan of Ayn Randy’s work. Every word of this short story is well placed. The theme is clear and resonates. The dystopian world is almost as creepy as Joe Biden. However I only gave the story 3 stars as it seems incomplete, almost like a story outline that never delved into a proper clash between protagonist and the antagonistic forces. It built up a bit, had a moment of slight conflict and then coasted to a conclusion.

this woman was prescient. I stand in awe of her wisdom . listen and learn.

A LESSON TO BE LEARNED

my favorite book of all time. I first read this book in the 6th grade. I've reread and listened to audio books of it at least 15 times through out my 43 years. It is a lesson about what the world could become if we do not passionately defend our God given birth right of individuality and free will.

Sharing this book with my students has always promoted fierce thoughtful writing when the students develop personal connection reflections.

I enjoyed Anthem, the science-fiction dystopian novella originally written by Ayn Rand in 1937.

The setting of the story is a collectivist society in which the concept of individuality has been eliminated. Individuality of any kind is forbidden: no one thinks for themselves: people don’t have individual names, people cannot choose their jobs or their spouse. Anyone who tries to behave in a manner different from the collective is punished. Everything about a person‘s life is chosen by the “Council”.

In the story, a man known as Equality 7-2521 rebels against the collectivist society by falling in love with a woman and covertly engaging scientific research. When the Council finds out, Equality 7-2521 flees into the wilderness with the woman he loves. Together, they plan to start a new society based on individualism.

The narrator did an excellent job reading this audiobook; his voice was pleasant and he managed to create the perfect mood for this story.

I was provided this audiobook at no charge by the author, publisher and/or narrator in exchange for an unbiased review.

There are moments when you'll feel uneasy while listening to this classic. Our reality is disturbingly close to this work of fiction at times. It could happen and that's not a comfortable feeling. The writing is of course excellent and the narrator did an exceptional job with his interpretation. At the end, this dystopian story gives you hope in its own whimsical way so if you like the happy ever after ending, you will not be disappointed..

Those last few chapters though...

I am unsure if this is required reading however it should be for every individual around the world. I hope it's message resonates with whomever reads it.