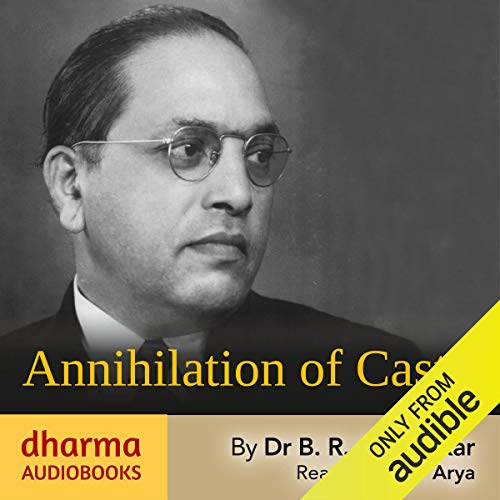 Dr. B. R. Ambedkar (1891-1956) was one of the most extraordinary figures in the history of India. He was born in poor circumstances as an Untouchable - high castes regarded physical contact with Untouchables as polluting and condemned them to do the dirtiest of jobs, sweeping and the collection of human detritus. But Dr. Ambedkar's natural ability and determination (and some good fortune) enabled him to rise above caste prejudice and become one of the founding fathers of modern India.

He was the chief architect of the Indian constitution introduced at Independence in 1947 and saw the concept of Untouchability made illegal. But he had campaigned for decades. In 1936, Dr. Ambedkar wrote a speech - famously not delivered - in which he outlined the case against the whole existence of caste divisions in India.

In Annihilation of Caste, rationally and methodically, he takes apart the basis on which caste exists, and which has delivered harm, pain and misery on untold generations - and continues to do so. Individuals such as Mahatma Gandhi shamefully continued to defend caste distinctions (his response is included here).

Even today, in modern India, many of the 200 million Dalits (as the ex-Untouchables now call themselves) experience severe prejudice and violence.

Annihilation of Caste is as important a political statement concerning basic human rights as The Rights of Man or The Communist Manifesto, and is just as relevant in the 21st century , where caste and class still exercise a baleful effect on society.

In 1956, despairing of true justice for the ex-Untouchables within Hinduism, Dr. Ambedkar, and millions of his followers, converted to Buddhism.

What listeners say about Annihilation of Caste

Hammer to Break the Glass of Ignorance

I wish everyone could listen/read to see the ugly/heinous caste reality through Dr. Ambedkar's words.

A must-listen for many reasons

Mandatory reading for every Indian. Ambedkar's anger with injustice shows up in fearless, searing honesty.

The debate between Gandhi and Ambedkar is compulsive viewing.

This contains some of the most brilliant thinking on what it means to be outcast in a world that tries to butter over it. A truly brilliant work that everyone should read.

This is about what I expected this to be for a political speech from the 1900's.

this is an eye opener speech revealing the hatred and biased opinion one had, despite of being such a learned person Dr. ambedkar had learned only to argue and tried to thrust his own opinion and views. I am not sure when the responsibility of forming the Indian constitution was given to Dr. ambedkar, whether this was based on caste or the capabilities, Dr. sahib had. I think entire speech is with wrong intention as instead of annihilation of caste, it seems annihilation of Hinduism.