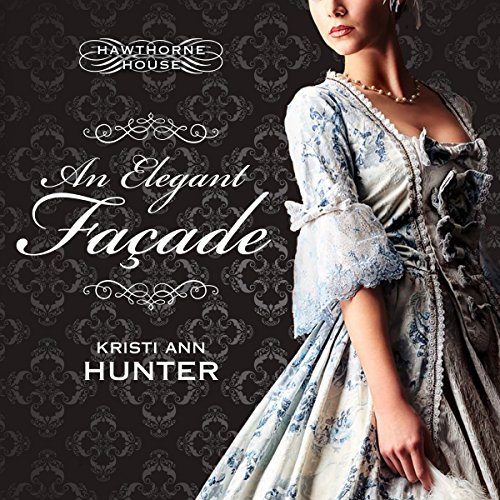 Lady Georgina Hawthorne has worked tirelessly to seal her place as the Incomparable for her debut season. At her first London ball, she hopes to snag the attention of an earl.

With money and business connections, but without impeccable bloodlines, Colin McCrae is invited everywhere but accepted nowhere. When he first encounters the fashionable Lady Georgina, he's irritated by his attraction to a woman who concerns herself only with status and appearance.

What Colin doesn't know is that Georgina's desperate social aspirations are driven by the shameful secret she harbors. Association with Colin McCrae is not part of Georgina's plan, but as their paths continue to cross, they both must decide if the realization of their dreams is worth the sacrifices they must make.

What listeners say about An Elegant Façade

The narrator was clearly not British and struggled with both the English and Scottish accents. However, if one is able to get past that obvious flaw, the story was delightful - perfect light reading.

Another great listen by Kristi Ann Hunter.. I am enjoying this series and the storyline is a good one... This book is well worth the listen if you like Regency Romance novels.....xx

Fun, escapism. . .Loved the characters. Both the plot and Character development was fun carrying on from the first book in the Hawthorne Series...yet nice that they would stand-alone if someone only has access to the second one. THIS AUTHOR IS A KEEPER! KUDOS to Kristi Ann Hunter!!!
HOWEVER, Warning, one MAJOR drawback is this Narrator!!! I rarely ever comment specifically on the narrator, however Anticipating my long journey, I downloaded the first two books in the series...while I LOVED 💗the STORY💖, continuity and further development, I was terribly disappointed to find that Audio Books SWITCHED Narrators on us!!!!! 😲 This one is Charlotte Anne Dore and she was dreadful, she certainly was NO MATHCH...too flat and mechanical sounding! 😢 It was a CHORE and sheer determination to persevere listening. Only because Kristi had me hooked did I slug through listening! PLEASE BRING BACK Ann Marie Gideon! 💞 Ann Marie Gideon was exceptional, she was so expressive and the distinct voices she gave each character, made you forget that there was only ONE person reading the story, She is AMAZING!!! Bravo!!!

I loved the first book in this series. I've listened to it at least 4 times! I Crack up every time. While the first book has the intrigue and somewhat of a comedic aspect, this one is on a more serious note. A good portion of this book soinds very familiar to the first at many of the situationsvare repeated, but told from the view ponts of the main characters in this book. It does seem a bit repetitive, but I really enjoy how this story makes you rethink how you viewed the characters in the first book...it really left me thinking!
I love the narration of the first book so much I was really hoping this one would be similar...it's not my favorite, but I think the book overall hold up and is worth the listen...I'll probably end up re-listening to this one too!

Because of the Narrator - it's terrible!

I think anyone who READS this book rather than listening to it would enjoy it.

I only listened to the first 3 chapters, so not much. I had hoped it would be wonderful, like the last one.

She sounded as if she were reading, rather than telling a story. And the words didn't flow.

If you could play editor, what scene or scenes would you have cut from An Elegant Façade?

n/a - no scenes, only the narrator.

If you listened to the first book in this series, don't waste your time with this one - it will be a huge disappointment.

The narrator wasn't the best at the beginning of the book, but it improved drastically as the store progressed. This was a sweet story which had be both loving and hating Georgina equally and the pace of the story moved along at a good speed. It was a nice listen overall.

Captivating, sweet, tender, inspiring and delightful, even though the narration was a bit slow. I recommend this book without hesitation.

I love the story and I was looking forward to hearing Georgina's story, but it was severely diminished by the stop and go halting speech of the narrator. She made it irritating to listen to.

With our world in such turmoil, this book was a reminder of the importance of God's word and direction for our lives. He is the same yesterday, today and forever!

The narrator of this book is very distracting and annoying. She focuses on enunciating too much to the point that the delivery is stilted. I remember another book that she narrated where she bothered me do much that I had to get rid of the book. She does occasionally forget to over enunciate throughout the house which makes those parts perfect. It seems to be when she stops over analyzing her performance that the story will flow.

Within the first few minutes of listening to this audio book I realized I recognized this as the same halting, grating, horrid narration from another audio book that I simply could not suffer through. It was as incredibly disappointing this time as it was last time because in both cases I had been eager to listen to the next book in a series in which I had very much enjoyed the preceding audio books. Last time, I had purchased the audio book with a credit, but, thankfully, this time I started listening to it through Audible Escape, so I am not stuck with it. I think I may have to find a copy of the book to read myself because this narration is just too bad to make it through.

unable to listen to this - horrible

the narrator use of intonation and slow narration didnt work for me. increasing the speed didnt help. i just couldnt get thru the story.

annoyingly christian towards the end

It would be nice if these books that turn all christiany would do so at the beginning. But this one lets you get six hours invested before jesus saves the day. Would be a 5 start book otherwise. As it is, it's beyond annoying. I don't need religion in my romance. I'm ok with you wanting it there, but state it in the summary. Put it upfront. Give us a trigger warning!!