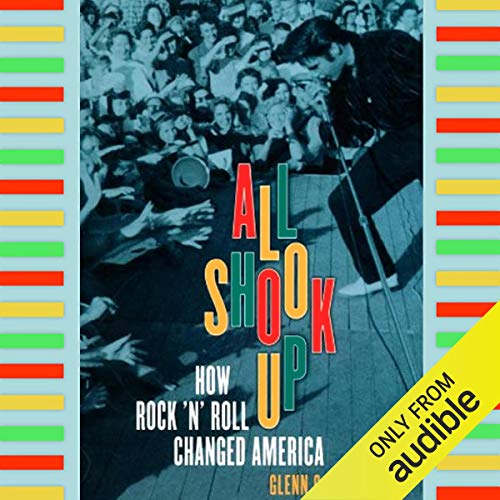 By: Glenn C. Altschuler
Narrated by: Jack Garrett
Try for £0.00

The birth of rock 'n roll ignited a firestorm of controversy - one critic called it "musical riots put to a switchblade beat" - but if it generated much sound and fury, what, if anything, did it signify?

As Glenn Altschuler reveals in All Shook Up, the rise of rock 'n roll--and the outraged reception to it - in fact can tell us a lot about the values of the United States in the 1950s, a decade that saw a great struggle for the control of popular culture. Altschuler shows, in particular, how rock's "switchblade beat" opened up wide fissures in American society along the fault-lines of family, sexuality, and race.

For instance, the birth of rock coincided with the Civil Rights movement and brought "race music" into many white homes for the first time. Elvis freely credited blacks with originating the music he sang and some of the great early rockers were African American, most notably, Little Richard and Chuck Berry. In addition, rock celebrated romance and sex, rattled the reticent by pushing sexuality into the public arena, and mocked deferred gratification and the obsession with work of men in gray flannel suits. And it delighted in the separate world of the teenager and deepened the divide between the generations, helping teenagers differentiate themselves from others.

Rock 'n roll seemed to be everywhere during the decade, exhilarating, influential, and an outrage to those Americans intent on wishing away all forms of dissent and conflict. As vibrant as the music itself, All Shook Up reveals how rock 'n roll challenged and changed American culture and laid the foundation for the social upheaval of the sixties.

The “Pivotal Moments in American History” series seeks to unite the old and the new history, combining the insights and techniques of recent historiography with the power of traditional narrative. Each title has a strong narrative arc with drama, irony, suspense, and – most importantly – great characters who embody the human dimension of historical events. The general editors of “Pivotal Moments” are not just historians; they are popular writers themselves, and, in two cases, Pulitzer Prize winners: David Hackett Fischer, James M. McPherson, and David Greenberg. We hope you like your American History served up with verve, wit, and an eye for the telling detail!

"One of the first to do rock-and-roll the significant service of locating it within the cultural and political maelstrom it helped to create. Altschuler does so with a good ear for the music and a deft hand, making this account a pleasure to read and ponder. He is not a flashy writer, but so much the better for his storytelling, which shows intelligence and narrative discipline.... Altschuler surpasses the admittedly sparsely populated field in the nuanced way he places the music within the conflicts - racial, sexual, commercial, and political - that it variously helped to encourage, exacerbate, and (occasionally) ameliorate. Altschuler tells a story of liberation and fear, of inspiration and exploitation, of repeated attempts to homogenize a form of cultural expression that sprang from somewhere so authentic in Western youth culture that it proved bigger and more powerful than any combination of its myriad opponents." (Eric Alterman, The Atlantic Monthly)

What listeners say about All Shook Up

learned so much! brilliant.

So much information about a subject I thought I already knew well. I didn't! Such a great book I will listen to this again.

50's Rock&Roll was more of a force than I thought

Born in the mid-fifties I missed most of the history described in this book. Up to now I thought the era was just like Happy Days or American Graffiti. This books tells the whole story of the era and its effects on race relations, culture, merchandising, and music that persist to this day. It does a great job of showing how 50's Rock and Roll set the stage for the 60's that would follow.

This book pinpoints the moment when teenage culture began. When all of a sudden being "IN" was everything and a major preoccupation not only to teens but for their families as well. Modern parents grappling with teenager cell phone bills can finally know how this whole mess started LOL.

In addition to the generational wars -- this book also describes effects on economics and marketing. It also describes in detail the causes and effects of the "payola" radio scandal and other social history tidbits.

This is a fascinating book. It's amazing to learn how controversial early rock n roll was at the time. I first heard this music as a child riding in the car with my parents, and to me it seemed laughingly tame.

Something that hit home for me was the similarity between how the older generation described rock n roll in the 50's, and how I describe the music of today. Many of the arguments I use to ridicule today's music are the same ones used by Frank Sinatra to describe Elvis.

Well written but limited in scope

it's got me all shook up