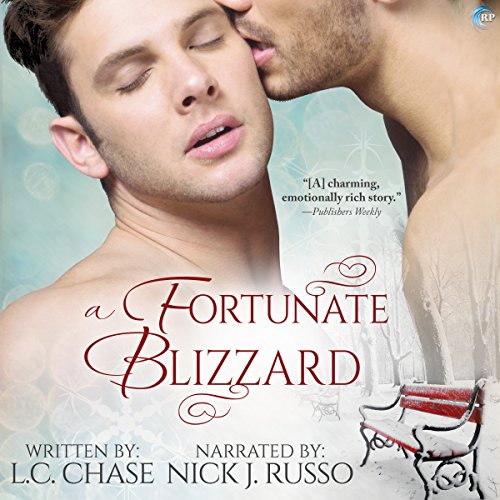 Artist Trevor Morrison has always appreciated the little things in life, treating each day as a gift. And with good reason; he's been on the transplant-recipient list for too long now. When he learns just how numbered his days truly are, he resolves not to take them for granted. But he won't be unrealistic, either - which means romantic commitments are off the table.

Marcus Roberts seems to have it all. He's handsome, financially sound, and on the fast track to partnership at a prestigious law firm. In reality, though, his drive for success has meant no time for friends or relationships. Add in the fact that his family discarded him long ago, and he's facing yet another holiday season alone.

When the biggest snowstorm to hit Colorado in decades leaves Marc and Trevor stranded at the same hotel, a chance encounter and a night of passion lead to more than either of them expected. Finding comfort in each other is a welcome surprise, but time is not on their side. Either they find a way to beat the odds, or they lose each other forever.

What listeners say about A Fortunate Blizzard

Probably one of the most touching love stories I have listened to and almost brings tears to the eyes, thank goodness it has a happy ever after ending.

*** Fabulous narration from Mr Russo...yet again!! Yes, I cried (sap) and he almost sounded teared up himself. All the stars!! ***

Tears and ugly crying indeed. This insta-love story certainly had me reaching for the tissue box. The visual imagery with the snow, the trees and the two men cut off and adrift, caught by the blizzard and just...connecting. 4.5 gooey stars from me.

Trevor, an artist who was suffering from increasing kidney failure, had more or less resigned himself to the fact that this could possibly be his last Christmas. He couldn't get back to Connecticut to see his family because of the weather, and was spending the night in a hotel where his eyes were drawn to another guy already sitting at a table...and whose own eyes were following every move Trevor made.

Marc was a civil rights lawyer, and such a lonely soul who buried himself in his work to compensate for the fact that he had no-one. Family not worth mentioning, a mother he hadn't spoken to in 10 years and he'd kept himself aloof from his work colleagues cos he didn't think he was worth bothering with.

The connection they made on that one snowy night was to see them through Christmas Day at Marc's home until Trevor knew that he had to leave...that to stay and give them both false hope for the future was something he couldn't bring himself to do. He left, leaving Marc a sort of Dear John note, but Marc wouldn't accept that it was over....I'll leave this one here.

What did you love best about A Fortunate Blizzard?

The way that these two men fall for each other while trying to convince themselves they shouldn't.

Aside from the amazing job the Author did when writing it, I enjoyed reading a book about two grown men acting like grown men. Very little angst, lots of emotion and passion and even a bit of heart break.

What about Nick J. Russo’s performance did you like?

Ah-Mazing! He nailed both characters voices flawlessly. He has this bravado tone to his voice that I just love, it's like honey dripping from the vine.

Who was the most memorable character of A Fortunate Blizzard and why?

Trevor, hands down. The decision he had to make and the affect it had on him, it tore me up.

What if one night, one chance meeting could change your life? Would you take that leap of faith if you have already convinced yourself that none of it matters? That is exactly the choice Trevor Morrison has to make. Trapped at a local hotel during one of the worst Blizzards on record, Trevor meets Marc, and enigmatic Lawyer with mesmerizing green eyes. The attraction is mutual and immediate so they decide to enjoy each other for the night. But when the sun comes up, Marc finds himself wanting more than just the one night stand that was agreed upon. Trevor is adamant that it's not possible, but when he can't find a flight out and faces the possibility of spending Christmas alone, Marc jumps at the chance to take Trevor to his home and show him what it could be like if he would only say yes.

I really enjoyed the strangers in the night aspect of the story and the chemistry between the characters. While there is a heaviness on Trevor's shoulders because he is facing the very real possibility that he won't find a donor in time, that he will finally succumb to kidney failure, Chase balanced that level of sadness with love and passion. Marc wants Trevor in his life, but more than that, he wants Trevor to live and he will stop at nothing to ensure that, even if he doesn't remain a part of Marc's life.

A variety of emotions played out in the pages of this story. Angst, passion, sadness, determination and love. It was well written, well rounded and wonderfully conveyed. Definitely a must read, I devoured it in one setting, just could not put it down.

I Loved how this book played out Even the End of it was a great way to end a book like this.😊🎅💚

Trevor and Marc are a great couple - had read the kindle version a few times and loved it...waited for this one in Audible and it was not disappointing! MY only complaint I bet is shared by many others...the end of the book is too swift, too fast a resolution, I want more of these two, more detail, more internal POV's..just more. But, regardless, L.C. got to me immediately and these two I won't forget any time soon. Thanks for a sweet story!

Just as Trevor begins to accept that he might be living his final days on Earth, he meets Marcus, a crazy workaholic lawyer. Their chemistry is incendiary, but it may not be enough. Is it cruel to even get involved?

I don’t want to give more of the story away… but… it ends on a very HEA.

I’m so glad this is being released near the Holidays because it’s so mushy, tear-jerking, sweet, and lovely and reading/listening to this around the holidays adds to that flavor.

I loved Trevor and Marcus as a couple. I loved Trevor’s family! I loved Marcus’ friends! I loved the way LC Chase found us a (somewhat) plausible resolution to a seemingly impossible problem.

If you are in the mood for sap, holidays, tears, and happiness – give this one a try!

I’m always a fan of Nick J Russo. It’s so nice to be able to just TRUST that the narration is going to be done well. Sure, he doesn’t always pronounce the medical words right, but, probably nobody will notice ☺ He’s great at the timing and the emotions – and there are so many feels in this book.

I loved Natalia’s accent and he gives each of the MCs their own, unique voice so it’s easy to follow.

If you need something more to cry about this holiday season – this will give you a lovely way to let those tears flow.

Truly a beutifull story that made me cry and laugh and even made my heart beat faster. Loved the deepness of the charachters and the story, almost wish it was longer, but its still perfect the way it is. Definitely gonna listen to it again!

What made the experience of listening to A Fortunate Blizzard the most enjoyable?

I appreciated how well the narrator, Nick J Russo, matched the story. His character voices-guys and gals- were well done as was his adaptability to the tone of the scene. He did well with the lighter and deeper aspects of the story making it an enhanced book experience.

Marc's paralegal. She was fantastic the way she lit a fire under him for action, but did it in a way that was non-judgmental and kind (though forceful and sassy).

Which character – as performed by Nick J. Russo – was your favorite?

I thought he did a wonderful job portraying, Trevor, a man who is dying of kidney failure and reflects on his circumstances, mourns the loss of future, loves life, but still has it in him to reach out to make other lives better.

A blizzard brings a workaholic and a dying artist to share a heartwarming holiday.

I received this book free.

this is the first book I have read from this author and it was excellent. great love story great characters I can't wait to read other books from this author I highly recommend this book. you'll fall in love with it.

This was another book I took a chance on because Nick Russo was the narrator. I'm glad I did as I really enjoyed this emotional, sweet story. Two strangers meet in a blizzard, hook up, and find a connection. But one has a terminal illness and doesn't think it is fair to continue the relationship. The other doesn't take no for an answer. This story asks, what will you do for love? Although the HEA is a little unrealistic, I'm glad it happened. Nick Russo does an amazing job bringing this story to life. Wonderful listen, but bring the Kleenex.

I liked this book, the only thing I didn't like was the end.....it just ended however I do recommend this book it does take the time to have some character development and make you feel for them.