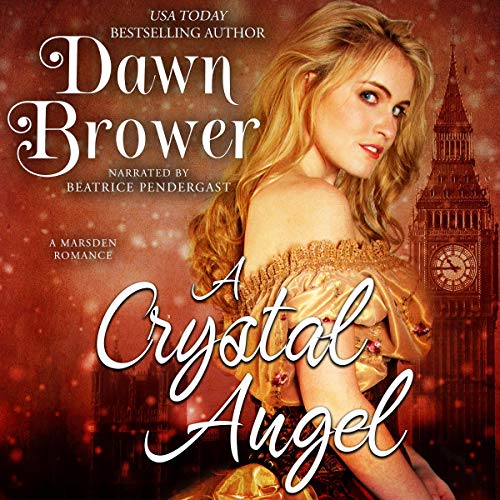 By: Dawn Brower
Narrated by: Beatrice Pendergast
Try for £0.00

A drunken promise of betrothal has turned Thor's family against him. Will Thor earn Pia's forgiveness and find their runaway children in time for Christmas?

After a night of cards and drinking, Thor's splitting headache is the least of his worries. When a messenger arrives with a contract for him to sign, his wife, Pia, discovers he's agreed to betroth their son to the Earl of Devon's daughter. Pia's beyond furious and demands he fix it - or else. After overhearing the argument between their parents, the twins, Liam and Lily, decide to run away in protest of the contract. Thor and Pia set out to find their rebellious children before something dreadful happens to them. Will Thor convince Pia to forgive him and find the twins before Christmas, or will their family fall apart forever?

What listeners say about A Crystal Angel

It had a great story and really helped to get you acquainted with the characters for book 2!

I enjoyed this short story; the narration was perfect for it.

It’s kind of a story about think before you act weather your 14 or in your 30’s and it doesn't matter the era either.

Thor made a bad choice while out with the Earl and betrothed his son to the Earls daughter.
Pia, Thor’s wife was not having this at all. I love the dynamic between these two.
And in a home with teens you’re going to have eavesdroppers and who don’t always make the best of choices either.

Lily and Liam are brother sister, Noah is Liam’s best friend and lost his parents. Thor has taken him under his wing and Pia wants to mother him. Lily is a little jealous of this relationship because she doesn't really have friends.
All in all like I said a good short story I enjoyed the adult’s perspective and the children’s.

What a wonderful addition to this series

I loved the away the author filled in the blanks with this short and sweet read. The author goes into how the contract of marriage came about for Gemma and Liam. I do have to say I did wonder. The author fills it in nicely. It was nice to get to know Liam family and just how much love his parents have for each other. I did however think the love scene with them wasn’t really needed since it was more of a book about the contract and how Liam felt about this. His sister is something else so full of herself but when it comes down to it really loves her brother. It was nice to see some of the characters from the other stories. With this background it was very easy to fall in love with Liam and Will. This adds so much more to the story of Gemma and Liam.

Ms. Pendergast narration was very good I really had a hard time liking Pia she came across as spoiled but she really wasn’t. I did come to like her when the narrator brought out her true nature. I thought her male voices were great and most of her female one was very good as well. I didn’t really care for Pia voice but as I said she grew on me. I felt the narrator did a wonderful job on the tones putting real emotion into the audio. If any breaks were taken I could not tell. There were no place where the volume changes it stays the same throughout. Her delivery was great and her performance was good. You always knew who was talking and just what they were feeling. It was an enjoyable audio.

I felt the author really added a lot to this series with this short story that really pulled you in giving a very entertaining read that kept you invest and wanting to read the next book in the series.

To tell the truth this is the first Historical fiction seriers that I have listened too. AND my first time listening to Author DAWN BROWER.

Not sure if its really for me, but I am going to listen to the rest of the series.

I enjoyed this book a bit more then book 1.
The twins grow up and learn a hard lesson.

If you like Historical fiction you'll probably like it. I just have to listen to more to find out if its really for me.

At speed 1.50x the vocal artist did a really good job.

I received this book for free for a honest review.  I loved the characters and storyline.  it flowed very well and held together.  The narrator did an excellent job of bringing the characters to life.  reccomend

This was a short and sweet historical romance. The characters and plot were great, and I liked it. I received a free review copy of this audiobook at my request in exchange for a review.

love this series and hearing it is even better. this is a really good audible. it takes you back to the past and the voice even keeps your attention. This short story is a step back in the twins life and explains Liams past with Gemma.

sweet short story. I liked the characters and the action. I will listen to it again and again.

This is a great and fun short story. I had the pleasure of reading this and listening to the audio. The audio really brings this adventure to life. I look forward to the rest of this series on audio. Historical romance is a favorite of mine and Dawn Brower has created a wonderful series.