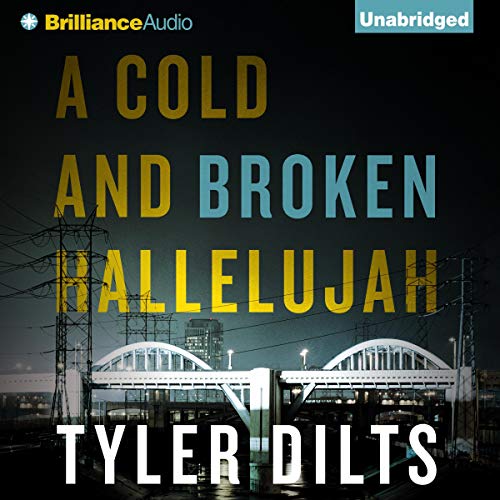 A Cold and Broken Hallelujah

By: Tyler Dilts
Narrated by: Patrick Lawlor
Try for £0.00

On a sweltering September night, Long Beach Homicide Detective Danny Beckett is called to a grisly crime scene at the mouth of the Los Angeles River. A defenseless homeless man has been burned to death by three teenagers with gang ties. The suspects are already in custody, and the evidence is overwhelming - but when one suspect’s brother is targeted for murder, Danny starts to think there may be more to this seemingly clear-cut case. Obsessed with discovering the true identity of the victim, a gentle vagrant who may have been hiding a tortured past, Danny and his team start to uncover a high-reaching conspiracy that puts them all at risk - and threatens to open new wounds that could cut even deeper than Danny’s old ones.

What listeners say about A Cold and Broken Hallelujah

A Dull and Boring Hallelujah

I wanted to like this book but I just couldn't. The performance was stilted and the story just couldn't hold my interest. I kept going hoping it would get better. It didn't. The descriptions of Long Beach were pretty good. To be honest, I was about halfway through the book when I realized I didn't even know the name of the main character. The sad thing was, I didn't care.

The cold and Hallelujah by Tyler Dilts

I enjoyed the book it was easy to listen to. I will probably read/listen to more of his books.

I truly enjoyed this book
Narration was wonderful.
I recommend this book for anyone who enjoys law and order fiction.

Too slow and drawn out. Never build a strong case

as they wanted and then jump to going after the head boss behind crime. Narrator was very good.

I enjoyed the story overall. I really enjoyed the narration, he did a very good job with the voices for each of the characters and reading the story dramatically...
the racey language would be the only thing that might deter me from listening to it again:-(
thank you for the story!😊

This book had it all - comedy, mystery, family relationships, friendship and even a touch of romance.

The style is rather matter-of-fact and reminiscent of Detective Joe Friday from Dragnet, but once in, you appreciate it for what it is - a cop story. It was eye opening as to process and procedure and believable. Told through the eyes of the detective the hardness, kindness and emotion/emotionless aspects of the job came through seamlessly. It also brought to light some of the things I often forget about - old injuries that continue to plague long-time officers as well as the cases that never leave their mind. Not surprisingly it also gives window into the camaraderie of members of the force and those they work with outside the force (social workers, coroners, and family members of both victims and persons of interest).

I enjoyed it and would recommend it.

The narration was a perfect fit for this book.

This Narrator had a laid back vibe that I wasn’t sure I could hang with but I’m so glad I did. The Characters were interesting and flawed but likeable and easy to relate to. The mystery and police procedure unfolds over the course of the book and I found myself dreading that it would be over. Would love a sequel with these characters and I think this Narrator fit the main Characters personality perfectly.

Seriously, I came to the end of this book and thought “really? That’s it? What a let down!”
I was expecting a good twist and at least SOME suspense. Nada.

The story was slow and anticlimactic. the reading was uninspired and left me zoning out.

I like the story line, the character development . I have listened to the other two books in this series and really enjoyed them as well. Since this book was published in 2014, I hope the next book in the series is coming out soon.