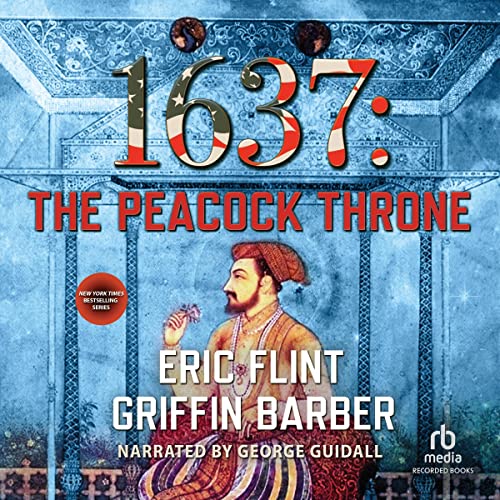 By: Eric Flint,Griffin Barber
Narrated by: George Guidall
Try for £0.00

The emperor is dead; long live the emperors!

The assassinated Shah Jahan lies entombed beside his beloved wife in the Taj Mahal, while their progeny drag the Mughal Empire into a three-sided struggle over the succession to the Peacock Throne. The diplomatic and trade mission from the United States of Europe is openly siding with Princess Jahanara and her brother Dara Shikoh. The mission, made up largely of Americans transplanted in time by the Ring of Fire, is providing the siblings with technical assistance as they prepare to fight their rivals for the throne, Aurangzeb and Shah Shuja.

Meanwhile, the Afghan adventurer Salim Gadh Yilmaz, confidant of two emperors—Shah Jahan and now his son Dara Shikoh—has been elevated to the position of general. He has great challenges to face, not the least of which is resisting the fierce and forbidden mutual attraction between himself and Princess Jahanara. As the conflict deepens, the junior members of the mission are sent east to buy opium needed by the USE’s doctors. Their guide, merchant Jadu Das, has an agenda of his own, one entrusted to him by Jahanara: seek out her great uncle, Asaf Khan, and promise whatever is needed to bring his army over to Dara’s side. The USE’s mission was sent to India in search of goods needed in Europe. But now they find that straightforward task has become enmeshed in a great civil war—for control of The Peacock Throne.

What listeners say about 1637