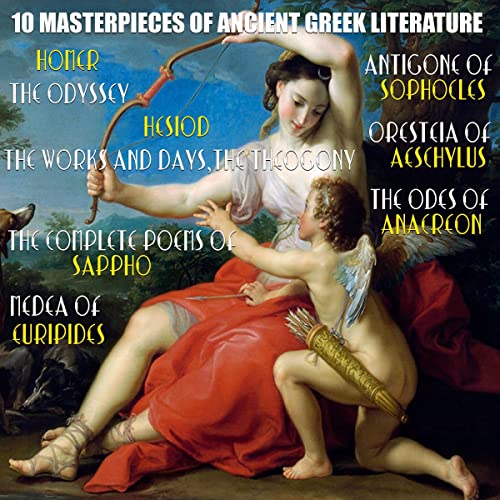 The earliest surviving works of ancient Greek literature, dating back to the early Archaic period, are the two epic poems, the Iliad and the Odyssey. These two epics, along with the Homeric Hymns and the two poems of Hesiod, Theogony and Works and Days, comprised the major foundations of the Greek literary tradition that would continue into the Classical, Hellenistic, and Roman periods.

This carefully selected collection contains:
The Odyssey
The Works and Days
Theogony
The Complete Poems of Sappho
Medea
Antigone
Agamemnon
The Choephori
Eumenides
The Odes of Anacreon

What listeners say about 10 Masterpieces of Ancient Greek Literature

A good listen, but made difficult due to editing

All the works contained in this audiobook are well narrated and fascinating. My low rating comes from three very annoying factors.

1. The various poems switch from Latin and Greek naming. In the Odyssey, they use the Latin naming convention, in Theogony they use the Greek, for example.

2. The chapter naming structure. The chapters are named 1-34, I believe. If you want to skip to one particular poem, it is very difficult as they are not named at all.

3. There are numerous times where the narrator re-reads the same sentence over again.